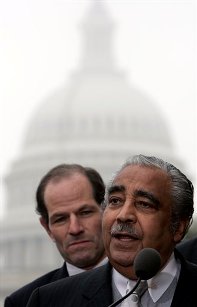 When Governor Spitzer announced he was dropping his controversial plan to offer driver's licenses to illegal immigrants yesterday, he was praised by his fellow Democrats. The NY Times notes that the decision won Spitzer "the kind of wide acclaim from elected officials that he could not win for the proposal itself." And that's gotta sting a little.

Spitzer had first introduced a broad plan to allow illegal immigrants to get licenses, which caused outcry from Republicans and praise from Democrats and immigration advocates. But then when Spitzer changed the plan into a three-tier plan to account for some people's concerns, almost everyone disliked it. And then Democratic presidential frontrunner Senator Hillary Clinton got caught up in the mess as she hedged her support for the plan.

Spitzer was hearing from Democrats, from Attorney General Andrew Cuomo, Assembly Leader Sheldon Silver and State Senate Majority Leader Malcolm Smith to Clinton's aides, that the plan was disastrous. And then there were his plummeting poll numbers. So yesterday, Spitzer said in Washington D.C., "I am here today to respond to the vast majority of New Yorkers of goodwill who have heard my best case and yet still disagree with my proposal...Leadership is not solely about doing what one thinks is right. Leadership is also about listening to the public."

As for the praise Spitzer got? Representative Charles Rangel, who liked the initial driver's license plan, said at a press conference with Spitzer, "I congratulate you, governor, for the attempt. The idea was right, the timing was wrong.” Senator Schumer, on the other hand, simply told reporters after meeting with Spitzer, "That's the right decision that he made."

For fun: The Daily News has a list of the top ten blunders Spitzer has made since January and the Post notes that Clinton's statement ("As president, I will not support driver's licenses for undocumented people and will press for comprehensive immigration reform that deals with all of the issues around illegal immigration, including border security and fixing our broken system.") is fodder for her rivals to call her a super-duper flip-flopper.

Photograph of Spitzer with Rangel by Susan Walsh/AP