Spitzer Resigning This Morning, Other Details 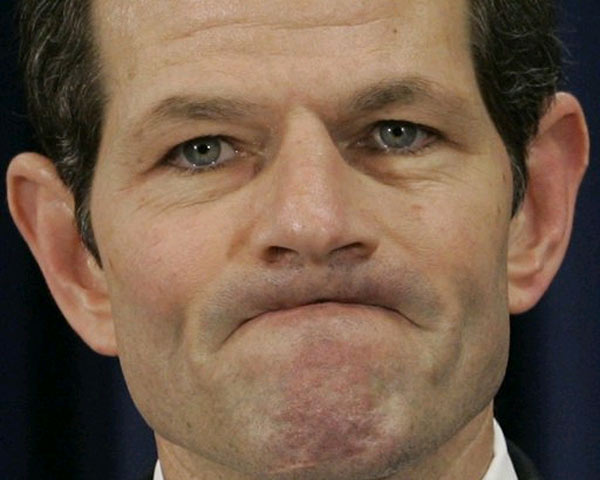 Multiple sources say that Governor Eliot Spitzer is resigning and has begun notifying top state officials of his decision and is now scheduled to speak at 11:30 a.m.. Of course, he was expected to step down yesterday, but it seems that after "an agonizing night," his resignation is all but confirmed. (The Times has a Q&A conducted with Paterson in January; like Spitzer he's a big Hillary Clinton booster.)

A notarized letter of resignation is expected to be delivered soon to the state Capitol, with Lieutenant Governor David A. Paterson to be sworn is as acting governor later today. Paterson, who today becomes the first African-American governor in New York and the first legally blind governor in U.S. history, had reportedly urged Spitzer to withhold resigning until Monday to better prepare for the transition, to no avail.

The embattled governor, cited as a customer of a high class prostitution ring and possibly facing criminal charges, apparently had drafted a resignation letter on Monday at 7 p.m., but his family and advisers said he shouldn't resign so quickly, as his power could be used as a bargaining chip with prosecutors. Some new details about the case:

Aides say wife Silda Wall Spitzer and other aides had been advising against resignation yesterday, as they hunkered down in the Spitzers' Fifth Avenue apartment, but the Sun reports, "argument in favor of resignation ultimately prevailed" with Spitzer realizing his association with the Emperors Club prostitution ring "left him with no choice but to accept that his once-soaring political career had crashed."

A WNBC/Marist poll released yesterday says that 7 out of 10 New York State residents wants Spitzer to resign; half want him to be charged with a crime. Lieutenant Governor David Paterson told reporters in Albany yesterday, "The governor called me yesterday. He said he didn’t resign for a number of reasons, and he didn’t go into the reasons, and that’s the last I’ve heard from him.” Paterson has now been informed that he will be sworn in later today.