Spitzer Plans to Turn Profit From Others' Misery 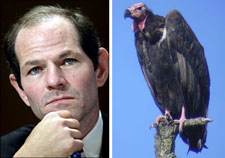 Former Gov. Eliot Spitzer seems to have turned the corner after resigning from his Albany office in the middle of a prostitution scandal. And instead of whiling away his summer at the beach, the Steamroller is planning on establishing an investment fund that will focus on turning people's failed dreams into cold hard cash for himself.

A vulture fund, as such vehicles are called, focuses on buying distressed properties and then flipping them for a profit. Always a man of the people, Spitzer called organized labor leaders to a meeting in his father's Manhattan offices to offer them a piece of the action if they'd put their funds up for the enterprise. In the middle of the real estate mortgage meltdown, there's lots of easy pickings out there for an ambitious entrepreneur such as Spitzer.

According to The New York Sun, the Governor seems to have gotten over the embarrassment of being drummed out of Albany for frequenting hookers, saying that Europeans in general were sympathetic for him losing his job for cheating on his wife with women the approximate age of his daughters.