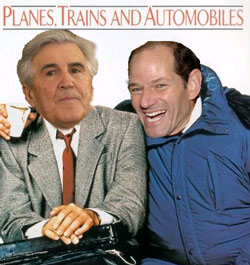 The close of Albany's legislative session highlighted the fight between Governor Eliot Spitzer and Senate Majority Leader Joseph Bruno. Spitzer, who has been planning a tour of the state to shame Bruno and Senate Republicans' decision-making, is now thinking about having the state inspector general look into Bruno's use of the state aircraft fleet for political fund-raisers.

The Times-Union reported that Bruno, a Republican, had used state planes to travel to three fund-raisers in NYC. Smelling a whiff of scandal, Democrats are calling it "Air Bruno" and want a full investigation, because it could potentially be violated of the Public Officers Law.

Bruno's camp denies the charges and even suggests says that Spitzer himself may have abused state transportation to go to fund-raisers. Bruno's spokesman John McArdle told the NY Times, "There was no use of the state helicopter for political fund-raising. He meets with business groups, business leaders, civic organizations, editorial boards. Every trip we take includes those things.” McArdle added that Bruno's life had been threatened and needs police protection. Huh, that sounds familiar.