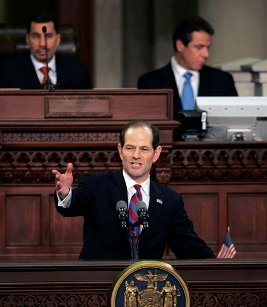 During his State of the State address yesterday, Governor Eliot Spitzer showed what eating humble pie can do, with a collegial plea for fellow lawmakers to "work together for the common good, despite any political or personal differences." After an embarrassing first year of missteps, Spitzer hopes to build bridges, rather than steamroll over them, by taking up ideas he previously scorned like capping property taxes. Here's how editorials rated the speech:

For fun: Capitol Confidential's tally of things like shout-outs, boos/hisses, and applause.