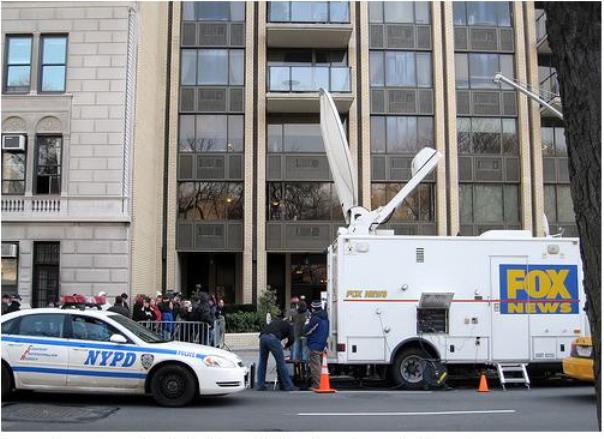 Top photograph of media outside of Spitzer's apartment building by Luna Park on Flickr; lower photograph of 985 Fifth Avenue from City Review

After expectations/hopes that Governor Eliot Spitzer would step down today, one of his top aides, Lloyd Constantine, denied a resignation was happening any time soon, "I have seen press reports that the governor’s resignation is imminent, and that is not true." Well, as long as he's governor, Spitzer's still super - superdelegate, that is.

His lawyers are reportedly working on a plea deal with prosecutors. Per Newsday, "one serious bargaining chip that Spitzer has to possibly avoid being charged with a serious felony, such as money laundering or avoiding federal currency rules, is to work out a deal in which he would give up the governorship." Paul, Weiss lawyer Michele Hirshman is representing Spitzer; her bio reads, "Ms. Hirshman comes to Paul, Weiss from the New York Office of the Attorney General where she served as first deputy attorney general under then Attorney General Eliot Spitzer." 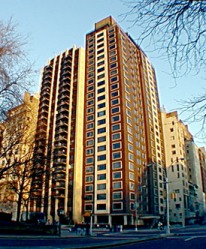 And, so, the media must continue their vigil outside Spitzer's apartment at 985 Fifth Avenue. An Observer reporter overheard one mother explain the fuss to a toddler, "It's nothing, sweetie. That's just where the soon-to-be ex-governor lives."

The post-war rental building (built on what were four townhouses) is owned by Spitzer's father, real estate developer Bernard Spitzer, and Spitzer's apartment has at least 3 bedrooms, 4 baths, and balcony (rent would be $16,000-20,000 but he's there rent-free). The building, which is not a "Good Building", does have individual storage bins, hides its AC units behind grills and allows pets.

Up in Albany, State Senate minority leader Malcolm Smith says he, State Senate Majority Leader Joe Bruno, and Assembly Speaker Sheldon Silver are working on a budget. He added, "I have not spoken to the governor at all. I have spoken to the Lt Gov. quite a bit." Someone who has spoken to Spitzer is Mayor Bloomberg: "I did talk to Gov. Spitzer this morning and I told him my thoughts were with him and wished him all the best. ... I did wish him all the best and told him I was thinking about him and his family."