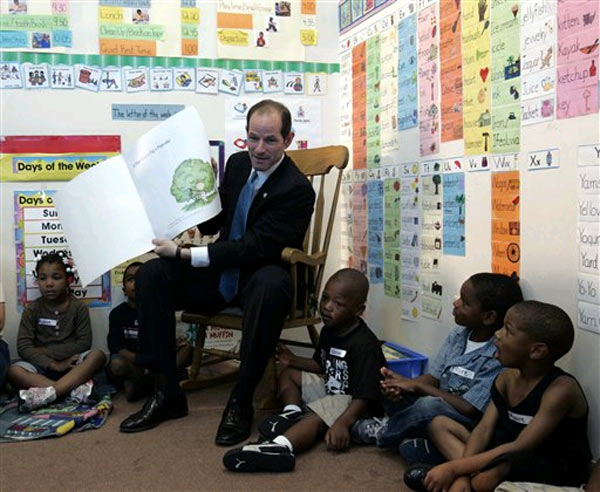 Talk about timing! Governor Eliot Spitzer visited an Albany child care center and got a photo op with some kids, which could only help take the attention off his bitter feud with Senate Majority Leader Joseph Bruno. But we wonder if these tots have been paying attention to the news: The Post reports that when Spitzer told them to call him "Eliot," one kid declined and said, "I want to call you 'clown,'" a suggestion three of his classmates thought was swell.

While at the school, Spitzer told reporters that he had nothing to do with the Times Union's story about an investigation in whether Bruno misused state vehicles to attend political fund-raisers. However, the Times Union believes that with all the rhetoric thrown around, they have taken their "tiff up a notch." Why? Well, for instance, Bruno has asked the Attorney General's office to investigate whether Spitzer had been spying on him (yes, accusations of espionage!), and sources tell the Post that AG Cuomo will seek "all the relevant records," including e-mail and correspondence between Spitzer's aides and the State Police.

The hubbub has apparently made Spitzer's own family weary. The Governor told the NY Times his wife has questioned his decision to become Governor.

He added, “She says, you know: ‘What was wrong with going into the family business? That wouldn’t have been so bad.’ ” (As a young man, Mr. Spitzer has said, he expected he would one day join his father’s lucrative real estate business.)

And not only that, but some other Democrats wonder what Spitzer's deal is. Assemblyman Keith Wright said, "He’s been very, very wrong, in terms of his style, if he wants to get things done." Wright has various beefs with Spitzer and even called him a "Democratic Giuliani." The NY Times piece is pretty great - for a moment, you wonder if Spitzer viewed the reporter as a stand-in-therapist.

And the Sun has an editorial today questioning Spitzer's alleged description of 78-year-old Bruno as "an old, senile piece of s--t": " If Mr. Spitzer wants a dispute with Mr. Bruno it's fine with us, but targeting Mr. Bruno for alleged age or age-related mental health issues is — how to put it — undignified."

Photograph of Spitzer reading to children by Mike Groll/AP