Spitzer Gets Back to Work, For His Dad 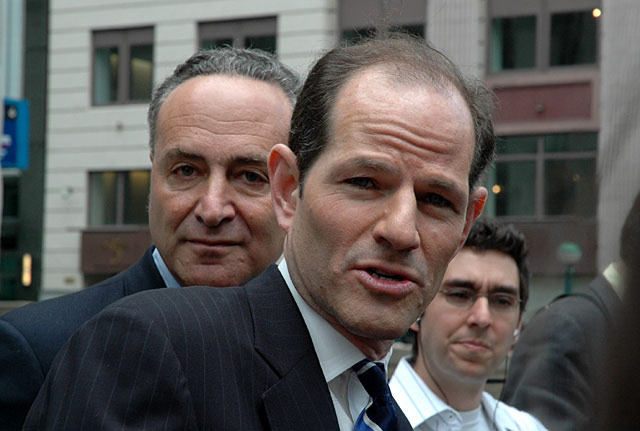 Photo of Spitzer and Sen. Schumer, by aboutmattlaw at flickr

Former New York Governor Eliot Spitzer has emerged from his upstate seclusion and now has his nose back to the grindstone--this time in the private sector. There was no need to polish his resumé, however, as his new boss is his father. Bernard Spitzer, who is 83 years old and suffering from Alzheimer's, amassed a half-billion dollar real estate and money management empire during his career.

The abrupt job switch might be at least some comfort to the ex-Governor's wife, Silda Wall Spitzer, who Spitzer said once asked him "What was wrong with going into the family business? That wouldn’t have been so bad." Following Troopergate and Hookergate, it seems that Mrs. Spitzer may have been right from the get go. In addition to the new job, the Daily News reports that Eliot Spitzer is in therapy; presumably to understand his desire to have sex with beautiful young women.