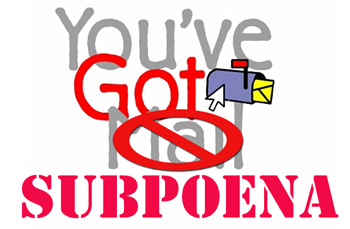 Albany county attorney general P. David Soares is taking another stab at the Troopergate scandal by issuing subpoenas for Gov. Spitzer's e-mails to and from his aides, as well as e-mails between aides. Troopergate centered around accusations that Spitzer and/or his top aides used state police to essentially spy on Spitzer's primary foe in Albany--state senate leader Joseph Bruno. The first Troopergate investigation resulted in the resignation of Spitzer's communications director Darren Dopp. The broad subpoena recently delivered to the Spitzer administration seeks public and private e-mails that may show the Governor pressured Dopp to perjure himself during a sworn statement.

In what is described as a testy exchange with the press at the state Capitol, Spitzer said that he's been fully cooperative with Soares in the past and will continue to do so in the future. The New York Times captures the tenor of the press meeting very well.

Asked whether he had received a subpoena, he said yes, but declined to say what it sought, saying, “I’m not sure what the rules are with respect to that.”

A reporter pointed out that the governor, a former prosecutor, did in fact know the rules, adding, “You can disclose whatever you want to disclose.”

Spitzer was the New York State Attorney General immediately before being elected Governor. Dopp, who was suspended for 30 days in the Troopergate scandal, has since resigned his position in the Spitzer administration and gone to work for an Albany lobbying firm.