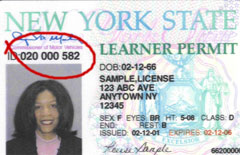 Gov. Spitzer made an abrupt shift from his stance of pushing forward with his plan to issue drivers license to illegal immigrants. He will be appearing with Dept. of Homeland Security officials in DC today to announce a compromise that involves two tiers of drivers licenses. The more secure version will comply with new federal Real ID standards that will be fully instituted in coming years. By 2013, US residents will be required to produce a Real ID or passport to board any flight. Legal or illegal residents could also apply for a standard license.

The shift comes as the governor has faced a firestorm of criticism both from Republicans and from within his own party. More than a dozen county clerks, who operate Department of Motor Vehicles offices upstate, have refused to carry out the policy, even though they are considered agents of the governor’s administration.

This week, in Erie and Niagara Counties, the clerks even said they would report those who could not prove residency to the local sheriff. And a recent poll from Siena College found that 72 percent of respondents opposed the plan.

And at least one county clerk has a filed a lawsuit destined for the State Supreme Court, after promising that he would refuse to comply with any directive to issue drivers licenses to applicants without valid Social Security numbers. And the controversy over licenses has stalled the work of the state legislature, as the Assembly has scaled back its calendar to prevent any riders blocking Spitzer's initiative to be attached to unrelated bills.

For their part, at least one immigrants rights group is outraged at the proposal of a two-tiered licensing system. The New York Immigration Coalition will be holding a protest across the street from the Governor's office on 3rd Ave. at 41st St. in Manhattan tomorrow starting at noon.