Spitzer and Bruno Continue Their Feud 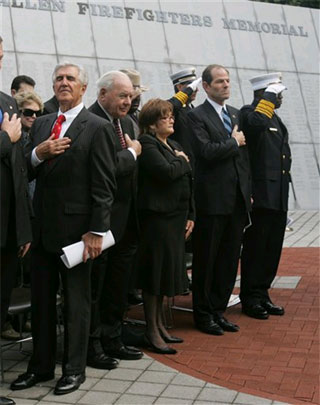 Governor Spitzer's campaign slogan was "Day 1, Everything Changes" but from the looks from this photo op at a memorial service for fallen NY State firefighters, things are politics as usual in Albany. The Post said this was the first time that Governor Spitzer and State Senate Majority Leader Joseph Bruno have appeared together since the Troopergate incident where Spitzer aides were planning to smear Bruno by distributing information about his travel plans to the press. The Post says the event was "no love-fest...They did not directly interact beyond exchanging a brief handshake and 'good mornings' when they arrived."

And then after the event, they pair blamed each other for the stasis of getting actual work done in Albany. Spitzer said, "We will just see whether things get done or not. We have been trying to govern. Others are off on a political frolic and detour." Bruno claimed that the "political frolic and detour" was valid, saying, "What they would like to have everyone forget is they enlisted the state police for the first time in the history of anyone's memory ... (to) ask the state police to track a person in office of the opposition party. To what purpose? To destroy him."

Here's the website for the Fallen Firefighters Memorial. And check out Wayne Barrett's Village Voice story about Troopergate. He feels the "scandal" has been overblown, in no small part due to the Post: "Just as there's no sign that Bruno, whose senate majority has shrunk to two seats, will let his Spitzer jihad go, so too with the hyperventilating New York Post, whose favorite state political party is facing an Armageddon of sorts in the 2008 senate elections."