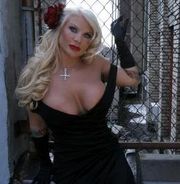 Surprise, surprise: Eliot Spitzer is being linked to Kristin "Billie" Davis's prostitution ring, which got busted earlier this week. Wicked Models, the East Side Madam's operation, toppled on Tuesday, and it looks like it's going to bring down some clients with it (rumor is the list is 10,000 strong).

While Police commissioner Ray Kelly says the case has no relation to Spitzer, The NY Post is reporting that the ex-Governor "regularly patronized" her company and was a long-standing client (something his spokeswoman denies). The information was obtained during a yearlong investigation and backed up by financial documents and other evidence.

If true, it seems like Spitzer isn't just into petite brunettes, as allegedly Davis herself "serviced" the ex-Gov even before becoming a madam in 2004. She's described as "a busty bottle blonde who hails from a ough-and-tumble California trailer park." And allegedly Spitzer wasn't her biggest client.

The source close to Davis said more high-profile names are involved. "There are some big people involved in the entertainment industry," the source said, adding that there are "sports superstars" including "a very prominent Yankee," along with Spitzer campaign contributors.

After being tipped off about the investigation, she was making arrangements for skipping town when the long arm of the law busted through her door. Currently in custody and being held on $2 million bail, she's looking at around 15 years in the slammer if convicted. She pleaded not guilty yesterday to her charges of money laundering and promoting prostitution.

Before being taken in she was apparently charging her clients around $1,600/hour, earning approximately $6 million since 2004 (her other call-girl websites included the Madison La A'mour and New York Body Miracle agencies). Looks like Ashley Dupré was working for the wrong company, and if anyone cashes in on the scandal, it'll be Miss Davis, who was already shopping her story around before the bust, and touted on her MySpace page, "I have created a business empire where I rule."

UPDATE:Sun & Sin has a screenshot of some of the "models" at Wicked Models.