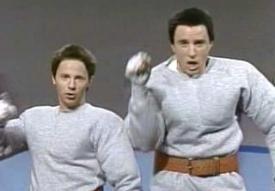 The case of the spin class smackdown has been sparking a lot of debate about proper workout etiquette. According to the Times, the noisy behavior of Stuart Sugarman – who was thrown against the wall during a spin class by a guy who was fed up with his vocalizations – is not at all abnormal. There are too many people grunting, cursing, and hollering “Let’s do it!” in gyms all over town, and also plenty of people who’d like to shut them up with brute force.

The paper talks to Canadian Dustin Vye, a Cirque du Soleil trouper, who is appalled at the vulgarity used by one of his weightlifting neighbors at J’s Big Gym on 181st Street.

I was tempted to go over and say, in a polite way, “If you wouldn’t mind keeping it down a little bit, it would be appreciated.” Things like that frustrate me. I’ve pushed my body to the max. I don’t have to grunt and scream and yell.”

Of course you don’t have to scream and yell, but how else is everyone going to know how totally jacked you’re getting? If the scolds who get their lifestyle tips from books like Debrett’s New Guide to Etiquette and Modern Manners had their way, we’d all be exercising in polite Canadian silence, with nothing to drown out the voices in our own heads. The book tells readers that “Neanderthal displays of caveman bravado, such as excessive grunting, hissing and huffing when lifting weights, are also not appreciated and should be assiduously avoided.” But even AskMen.com suggests, "Unless you have tiger genes, try to minimize your yelling while exercising."

Obviously Sugarman hadn't gotten to that chapter in the book before he got roughed up last August, but maybe it’s not too late for his assailant to get the current Debrett's author John Morgan to testify as an expert witness.