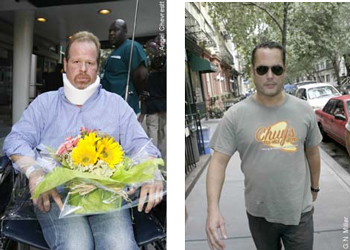 It was an enraged fellow spin class member that knocked him and his exercise bike into a wall at the Equinox Gym on East 86th St. in August, but now it's Stuart Sugarman who is very angry!

The 48-year-old hedge fund manager is furious that city prosecutors are only charging 44-year-old broker Christopher Carter with a misdemeanor in the incident, which occurred after Carter asked Sugarman to tone down ("Shut the f--- up!") his vocal exuberance ("You go girl!") and the whooping spinner declined ("Don't be a baby.")

The criminal complaint filed against Carter only mentions "sustained lower back pain" and "substantial pain," while Sugarman insists "This wasn't just a playground fall where Stewy fell down and went boo hoo," according to the New York Post. Sugarman spent two weeks at Lenox Hill Hospital and underwent back surgery to treat contusions to six vertebra with metal plates, screws, and cadaver tissue. His doctor claims that Sugarman was "one click away from a wheelchair."

Sugarman also suffered a concussion when Carter pushed him and the exercise bike into a wall. Adding insult to injury, Equinox left Sugarman a voicemail while he was in the hospital informing him that his gym membership had been canceled. Carter's lawyer claims that Sugarman is attempting to manipulate the criminal justice system in preparation for a civil suit.

We can't help but think that if this story is ever adapted for the screen, Sugarman could be well-played by Donnie Wahlberg, and Vince Vaughn would make a good casting choice as Carter.

(Photos of Sugarman and Carter from the New York Post)