No wonder J. Jonah Jameson gets so bothered by how much people love him: Spider-Man was arrested yesterday for punching a mom in Times Square. And this, friends, is why you always tip the masked guy posing for photos with your kids. 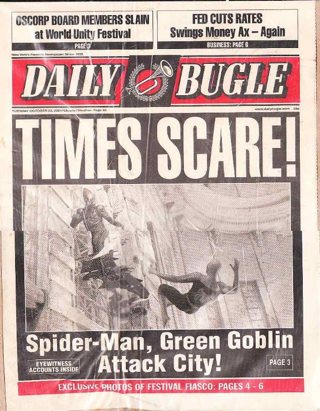 According to police a 35-year-old man named Philip Williams, dressed as your friendly neighborhood wall-crawler, got into an altercation with a 44-year-old woman when she refused to tip him after he'd posed for photos with her two kids. Williams was arrested just after 3 p.m. and was charged with assault.

But the story is even weirder than that. Remember, there are quite a few webheads working Times Square at this point. According to the Post:

Williams allegedly belted the mother after she wouldn’t pay him for posing with her two kids, causing the woman to storm off and get her husband. But she ended up targeting the wrong Spider-Man for revenge. “A woman came to me and said, ‘What did you do to me, you f--ker?’ ” said the other Times Square Spidey, who wouldn’t give his name.

“Her husband came over and said it was a different Spider-Man. They went over to the other one and started fighting.” Witnesses said the woman’s husband then pounded the offending Spider-Man with a backpack before cops arrived to bust Spidey.

Yep, New York now has so many fake Spider-Men running around Times Square's streets (and theaters!) that tourists can't even keep track of which one attacked them! So the real question out of all of this is, do we now need to start regulating our street impersonators?

In the past decade the number of people dressed as cartoon and comic characters in Times Square has been booming—especially since the space became a pedestrian plaza. But with great numbers comes a greater chance of something going wrong. In the past year alone we've had this punching Spider-Man, an allegedly gropey Super Mario and a very foul mouthed Elmo (who has since moved to warmer climates). To paraphrase the Daily Bugle, is it time to get these masked menaces off our streets?

#j. jonah jameson
#manhattan
#nypd
#spider-man
#spidey
#Times Square
Do you know the scoop? Comment below or Send us a Tip