An out-of-control driver sped into the rear of cars stopped at the light at a busy Staten Island intersection, and went flying into cross-traffic, killing one man and injuring 12 people, according to police. The grisly crash took place at around 1:45 Sunday afternoon near the William T. Davis Wildlife Refuge.

Police say that the 78-year-old driver of a Lexus sedan crashed into something, possibly a parked car, on Victory Boulevard at Baron Boulevard, then gunned it down Victory for two blocks to the intersection of Travis Avenue.

"I was riding my bicycle down Victory Boulevard," Bullshead resident Sloane Lipkin told the Staten Island Advance. "I heard a car going probably 80, 90 miles an hour. I assumed it was probably a teenager flying. When I saw the car pass me, I waited for the brake lights to come on, and unfortunately no brake lights ever came on. She went head on into the oncoming traffic."

Police say the driver rear-ended one motorist, whose car went careening into two others, and the speeding driver meanwhile went airborne into the intersection, landing amid those crossing Victory with the green light, and sending them crashing into one another. Nine vehicles were involved in all, according to the NYPD.

Responding paramedics found one of the drivers, a 75-year-old man, dead at the scene. First responders drove four people to Staten Island Hospital, including the Lexus driver, who is in critical condition, and another six to Richmond Hospital. Two others refused medical attention, according to police.

An volunteer emergency responder told 1010 WNS the aftermath of the crash is the worse he's ever seen. 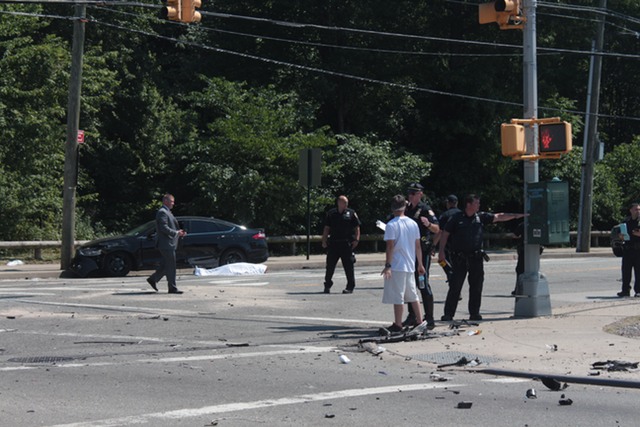 An NYPD spokesman said that speed is definitely a factor in the crash, but it's too early to say whether the driver responsible may have had a medical condition that contributed to the deadly chain of events.

Police are withholding the identity of the dead victim pending notification of his family.

The intersection was the scene of 19 crashes in 2015, leading to four motor vehicle occupants being injured, according to NYPD data.