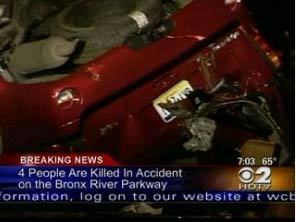 Shocked family and friends are mourning the deaths of four people who died in a car accident on East Tremont Avenue near Commonwealth early yesterday morning. The police believe that the GMC Envoy was traveling at least 80 MPH (and witnesses think it was closer to 90-95 MPH) when it hit a utility pole and flipped over twice. The NY Times reports the car "hit the pole with such force that its roof was shorn off, three of the four people inside were ejected and the driver was decapitated." It's unclear whether there was alcohol involved.

Witnesses described a grisly scene, with the car smashed like an accordion or a soda can. A witness, Brittany Barlow, told the Post that the car was "playing loud music and they got to the corner and the car started flipping." She saw the driver, Mayormond Baba, "but the next time I saw him, his head was off." Another witness, Andy Mavin, told the Daily News, "I saw a car flying down E. Tremont. It jumped onto the island and hit the light...The bodies flew out and the car started tumbling." And, speaking to Newsday, Ray Palacios, "I never saw anything like that in my life and I hope I'll never see it again."

The SUV was registered to Baba, a repair worker for Con Ed, but it's unclear if he was driving. His passengers included a Con Ed co-worker Luis Matias, another male, and a 26-year-old female. The men were declared dead at the scene while the woman, the only one wearing her seat belt, died at Jacobi Hospital.

Local residents say that speeding is a big problem in the area, but they've never seen an accident this terrible. And Matias' mother said that her son said he was celebrating the completion of a Con Ed training course with friends. She said to the News, "He wanted to go out there and have a good time with his friends. I always ask him, 'Why do you have to go out?'