Like almost every small business owner in New York City, audio engineer Dan Dzula needs fast, reliable internet access to do his job. When he tried to upgrade from his scrappy, local provider to something faster, he hit a wall. "Spectrum Business is the only high-speed provider who would even entertain the idea" of hooking up his building on Union Street in Gowanus, Dzula says. "But after 6 months and 5 or 6 on-site visits, Spectrum have finally killed my dreams of joining the 21st century." In an email Dzula provided to Gothamist, Spectrum gave him the installation cost estimate: $138,963.96.

"I understand that high-speed internet is not a right, and that there are also larger companies who probably spend $100k per month on server fees, alone. But mine is a one-person operation," Dzula wrote us in an email. "It just seems absurd to me that in New Yawk City, of all places, it would take 9 months of legwork (not to mention the bureaucratic anguish) and $139K just to get a reliable internet connection."

As part of his OneNYC plan, Mayor Bill de Blasio has pledged that every New York City resident will have access to affordable, high speed internet by 2025. As the City noted in its Truth In Broadband report issued earlier this year, nearly a third of the city—roughly the population of Houston, Texas—does not have a home subscription to broadband internet; a third of black and Hispanic households lack subscriptions. A little more than half of businesses don't have access to internet with speeds of 1 GBps (curiously that number has decreased slightly since 2017). Dzula says his current download speeds are around 10MBps. 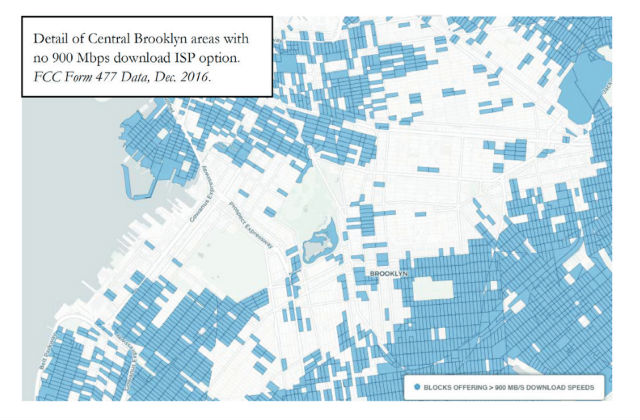 (via Truth In Broadband report)

Susan Lerner, the executive director of Common Cause New York, a good government group that is working to expand high-speed internet access, said that because the big internet service providers like Verizon and Spectrum aren't required to provide universal service like a utility, "they don't have the obligation to provide the final 100 yards of infrastructure. And they can charge through the nose depending on the physical situation of the building."

"It comes from a narrow focus on profitability in a very balkanized sense," Lerner said. "This building out of this block, as opposed to the entire neighborhood."

After Charter Communications acquired Time Warner Cable and rebranded as Spectrum, the company increased its profit in 2017 by more than 180 percent. The company reported $10 billion in gross profit last year, while Verizon reported $30 billion.

Last year, the de Blasio administration sued Verizon for violating its contractual commitment it made in 2008 to make its Fios service available to every household in the city. Verizon argues that it never made that promise, and that landlords have prevented access to buildings.

"There’s no political will, that is absolutely a failing, and that's why you can get 30 times faster broadband in Estonia, than you can in New York," she said. "We’re quickly becoming a second-world country because of our unwillingness to hold corporations accountable. You need to figure out ways to bring out the really substantial assets of the private corporate entities, that have made out like bandits, using our public access."

Asked about Spectrum's shockingly high estimate for installing an internet connection in Dzula's building, a spokesperson told Gothamist, "We continue to look into alternatives to the extensive and costly street cutting otherwise needed to extend our network to this business address."

"It took the federal government to provide electricity throughout the entire country," Lerner said. "There is a social reason, a communal reason to ensuring that service is provided to every single American. We got to that with electricity, we got that with basic phone service, and we haven't gotten to that with broadband, and that's a knock on us."

#Gowanus
#internet
#spectrum
#time warner cable
#universal broadband
#original
Do you know the scoop? Comment below or Send us a Tip