Specs and the City: Sarah Palin in NYC 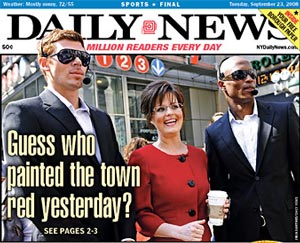 Alaskan Governor Sarah Palin is ready to make her Big Apple debut at the Republican vice presidential candidate. She arrived last night and is reportedly staying at a Times Square hotel (The Caucus said husband Todd and youngest child Trig are also here). Which means the lady on the cover of today's Daily News is a Palin imitator.

The News had a comedian dress as Palin and walk around the city with two beefcake-y bodyguards yesterday. Some reactions: "You're hot! But I hope you lose," "She seems nice. She seems smart. She likes hockey," and, in Washington Square Park, "I'm not a fan of her policies. In this park, I don't think she'll be very popular." As for how it felt to play Palin, Kristy Webb writes in the News, "I had a very un-Sarah Palin morning because I had to navigate myself on the subway from Prospect Heights, Brooklyn," and says the hair stylist as Warren Tricomi said she hadn't done that hairstyle since 1986. The News even had Webb go to Sephora (lipstick!) and the Hawaiian Tropic Zone restaurant!