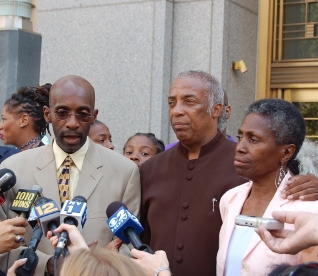 City Council Speaker Christine Quinn fired Councilman Charles Barron's chief of staff Viola Plummer yesterday. Quinn had required Plummer to sign a letter agreeing to behave during meetings, after Plummer heckled Quinn during a meeting about street namings and made reference to an "assassination" of Councilman Leroy Comrie, but Plummer refused (she has maintained that she meant a "assassination" of Comrie's character and/or political prospects). And Plummer filed a $1 million racial discrimination suit against Quinn.

Plummer's lawyer says that Quinn has no authority to fire Plummer under the city charter (though Quinn supposedly checked the charter to make sure she could). NYC IndyMedia reported that Plummer's lawsuit charges Quinn of "abuse of power, racial discrimination, violation of the First Amendment, and violation of due process." The case is due in Federal Court on September 24.

But Plummer still went to work yesterday. Barron escorted Plummer to work, and though Plummer's ID card was deactivated, she received a visitor's pass to enter the building where Barron's offices are located. Plummer says she'll volunteer for Barron's staff and still attend council meetings, which she can do as a visitor.

And some wonder if this dispute will help Quinn's plans to run for mayor. Some pundits tell the Sun she needs to build a reputation for toughness. Civil rights attorney Norman Siegel, though, finds the firing "constitutionally suspect."