Speaker Quinn Decides to Talk to a Lawyer 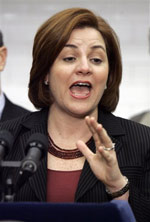 Embattled City Council Speaker Christine Quinn has decided to proceed through the ongoing city slush fund scandal with the guidance of a defense attorney. Federal and City investigators are looking into the allocation of millions of dollars of budget money to fictional organizations. That money was then funneled to private groups, who often kicked back funds in the form of campaign contributions.

Council Speaker Quinn said that the practice dates back to before her tenure as Speaker and when she found out about it, she ordered the practice stopped. Only her chief of staff can remember that order being issued, however, and a good deal of the "ghost" funds went to organizations that actively supported Quinn. The Speaker's finance director was fired from her staff as the scandal broke, but quickly found re-employment at a lobbying firm where Quinn's friend is a partner.

Speaker Quinn wasn't quick to publicize her hiring of Lee S. Richards III as her lawyer, even as she held a press conference to announce new reforms to the budget allocation process Friday. Richards is a former federal prosecutor and will be paid with city funds to guide Quinn through potentially precarious times ahead. The New York Times writes that it is standard practice for people in Quinn's position to hire attorneys to protect their interests as they testify before grand juries and other such things. Quinn has also hired the law firm of Sullivan & Cromwell to defend the City Council at taxpayer expense against charges that City Hall might be corrupt.