A dangerous swing in a South Slope playground has left several children with broken legs, and litigious parents looking for justice.

A large green swing, which was installed at the Park Slope Playground on 6th Avenue and 18th Street as part of a recent renovation, was removed in September after two children fractured their limbs on the low-hanging, multi-person playground toy. But now, DNAinfo reports, five families have filed notices of claim. According to lawyers, as many as seven children have been injured on the swing, the first within two weeks of the playground reopening.

"This was an accident waiting to happen," attorney Robert Kelner, whose firm is representing four of the children, told the site. "It is outrageous when one child is hurt on a device which is moronically set up, but when seven kids break their legs, and this all occurs in a short period of time in a New York City park where children are playing, it's frightening that no one from the city saw this device set up at this height and shut it down."

The trouble is not with the equipment itself, but its inept installation by the Parks Department, the claim asserts. The swing, called the Oodle, has reportedly been used without incident at 300 playgrounds around the country. A promotional video, however, opens with an ominous image of a wheelchair positioned in the foreground while children play. Coincidence? 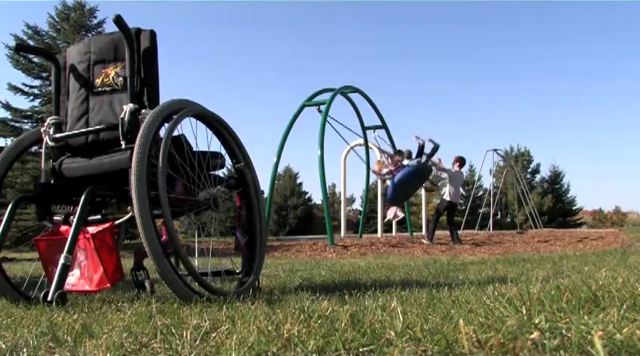