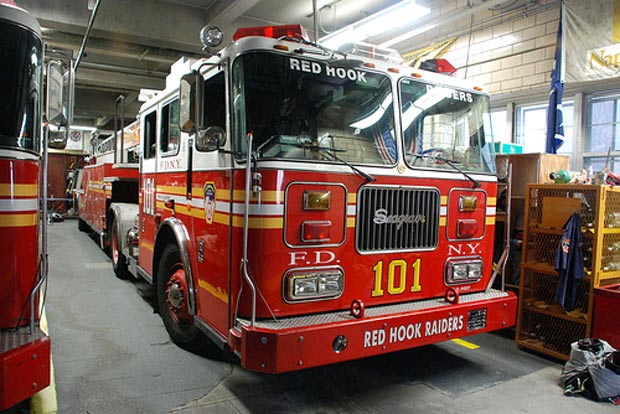 Members of a marching band from South Carolina were still years from entering high school when the attacks of 9/11/01 occurred, but the band arrived in New York City this week to visit a Red Hook Engine and Ladder Company that received a replacement truck in 2002 purchased with funds raised by White Knoll Middle School students and the residents of Columbia, SC. Ladder 101 of Red Hook had its truck destroyed in the attacks and all seven of its members were killed when the towers came down.

The South Carolina students spent three months raising $500,000 in their community to purchase a new truck in 2002. Eleventh grader Jessica Landrum told WCBS news, "Watching those people in the buildings, knowing there was nothing to help them, was probably one of the worst feelings you could ever feel."

Almost seven years later, the band made the trip to NYC to see the end result of their fund-raising efforts. They also performed at Carnegie Hall as part of a marching band competition. In a flag-raising ceremony at Ground Zero, the band remembered one of their former members who was killed in Iraq.