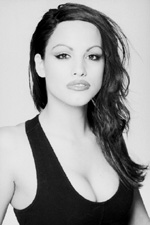 Last week, 23-year-old model Maxmilia Cordero filed a lawsuit against billionaire Jeffrey Epstein, claiming she had sex with him when she was 16 and aspiring to be a model. But now her claim has gotten a little crazier, as the Post reports Cordero may be a man.

"Sources" tell the Post that Cordero, born Maximilian, has been taking hormone treatments and has had plastic surgery become "Maxmilia." Cordero also has a number of MySpace pages (here's one where she says she's 17), one of them as a male. The Post spoke to Cordero's ex-boyfriend, William Unroch, a lawyer who helped Cordero file suit against Epstein, said, "She's female, and she's always been a female. I may also be a female. I'm checking with my doctors." He also said Cordero does have problems with drugs, "She's mentally unwell and on medication for her psychosis."

What's interesting is just last week Unroch was described as Cordero's boyfriend, but now he calls him her "landlord." (This photo of the couple was taken last year, when Unroch was accused of consorting with minors.) Unroch's latest Zen koan on his blog: "Any decent male who would rather blabble nonsense with a middle aged long island housewife than a 19 year old super model should sign up for the next Larry Craig Senate bathroom cruise." Unroch also has a model management agency.

#lawsuit
Do you know the scoop? Comment below or Send us a Tip