Federal judge Sonia Sotomayor's nomination to the Supreme Court is front page news around the country and especially in her hometown of New York. And as Republicans gear up to voice criticism of her, Democrats are ready—and excited. The former executive director of the Democratic National Committee Mark Siegel tells the Daily News, "I'm not only ecstatic, I pray that the Republicans do a frontal attack on her. Thirty-one percent [of the Hispanic vote] is too much for them. I want them to go down to three." And a Florida pollster who surveyed Hispanic voters for Obama's campaign told Politico, "The picture of an African-American president standing next to a Hispanic woman as his first choice for the Supreme Court — that picture is the worst nightmare for the Republican Party." 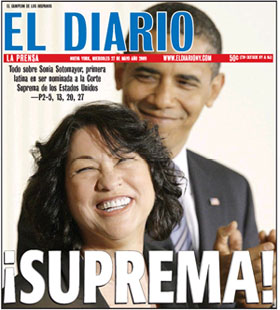 Of course, Republicans are ready to battle and pore over Sotomayor's decisions (Rep. Lamar Smith, a Texas Republican, worries that she has shown "personal bias based on ethnicity and gender"). The most-mentioned case is a reverse discrimination case brought by white firefighters against a New Haven, CT fire department.

In Ricci vs. DeStefano, 20 firefighters (19 white, one Hispanic) sued the fire department after the department threw out results from a test that would have qualified them for promotion because no blacks scored high enough on the test to qualify for a promotion. The fire department, which purchased the test from a consultant, and city worried that basing promotion for a supervisory role solely on a test would be improper. (Slate on the case, and here's an LA TImes opinion piece here) Sotomayor and two other judges ruled against the firefighters, but the case is now...at the Supreme Court.

The NY Times looks at her other decision and finds them, "marked by diligence, depth and unflashy competence. If they are not always a pleasure to read, they are usually models of modern judicial craftsmanship, which prizes careful attention to the facts in the record and a methodical application of layers of legal principles... But they reveal no larger vision, seldom appeal to history and consistently avoid quotable language." The Times also finds Sotomayor's brief summary on the Ricci case puzzling.

In the opinion section, the NY Times proclaims, "Based on what we know now, the Senate should confirm her so she can join the court when it begins its new term in October." The Post is (of course) more hesitant and actually wonders, "Did Obama make the most of his first opportunity to push the High Court to the left?" The Wall Street Journal says, "Republicans can use the process as a teaching moment, not to tear down Ms. Sotomayor on personal issues the way the left tried with Justices Clarence Thomas and Sam Alito, but to educate Americans about the proper role of the judiciary and to explore whether Judge Sotomayor's Constitutional principles are as free-form as they seem from her record."

And the Daily News is thrilled, "Barring the very remote possibility that something untoward crops up, let's get on with the making of U.S. Supreme Court Justice Sonia Sotomayor, alumna of Cardinal Spellman High School, giving the Bronx pride of place along with Brooklyn (Ruth Bader Ginsburg) and Queens (Antonin Scalia) on the world's most august judicial panel."

By
Samantha Max
‘We need to be given hope’: What Puerto Rican and Latino political power means in New York City
By
Brigid Bergin
Federal judge blocks NY gun ban in Times Square, subways
By
Jon Campbell
10 years after Hurricane Sandy hit NYC, memories come flooding back
By
Enrico Denard
and
George Bodarky
Get the news New Yorkers need in your inbox