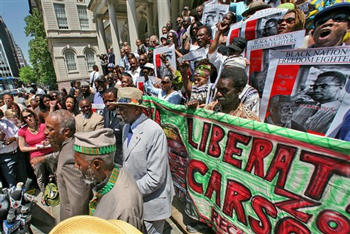 Despite having been defeated in a City Council vote, where his chief of staff heckled Council Speaker Christine Quinn and threatened a black councilman with assassination, Councilman Charles Barron renamed a street in Brooklyn "Sonny Abubadika Carson Avenue" anyway, declaring that the renaming "is official whether they [presumably the city] take that sign down or not." Sonny Carson's name was struck from a list of people who would get honorary street signs earlier this spring. Council Speaker Quinn felt he was too divisive a figure in the city's history. This sparked a City Hall battle that frayed nerves and invoked additional police protection.

Sonny Carson was a radical black activist, who promoted community economic empowerment and railed against "interlopers" like Korean grocers in traditionally black neighborhoods, against whom he organized a boycott. In addition, he generally described himself as just anti-white, refusing to be pigeon-holed as simply an anti-Semite.

The contentious City Hall battle to re-add Carson's name to the honorary street-naming list led to the death threats from Viola Plummer, Barron's chief of staff, against Councilman Leroy Comrie, representing Queens. This, in turn, led to death threats against Councilman Barron on a web site frequented by current and former members of the NYPD. We were actually hoping that this story was going to fade away after it reached a height of ridiculousness, and after Barron's resolution to re-add Carson's name was defeated.

Yesterday, however, Charles Barron and a group of supporters gathered at the intersection of Nostrand and Gates Aves to enact a de facto renaming of Gates Ave., as "Sonny Abubadika Carson Ave." It's expected that the city will remove the unofficial signs, but supporters of Barron and Carson pledged that they will continue to replace any removed street signs. We've given up on a sane resolution to this conflict.

In an interesting sidenote, we decided to see who Gates Ave. was named after, anyway. The Bed-Stuy avenue was apparently named after Horatio Gates, who was the Adjutant General of the Continental Army in the American Revolution. He distinguished himself at the Battle of Saratoga during the war, but was generally blamed for a disastrous defeat at the Battle of Camden in NJ SC. Gates was rumored to be involved in the post-Revolution Newburgh Conspiracy, when officers stationed in Newburgh, NY, as the war-ending Treaty of Paris was being hashed out to establish American independence, were allegedly plotting a military coup over their newly formed nation to demand backpay that they were owed. The coup plans fizzled and Gates eventually returned home to his plantation in Virginia, where he owned a number of slaves. He freed the slaves at the urging of his friend John Adams and retired to northern Manhattan. He's actually buried in the graveyard of Trinity Church in downtown Manhattan, at the head of Wall St.