Ah, to be the son of a (former) State Senate Majority Leader! According to new details from U.S. Attorney Preet Bharara's office, Adam Skelos allegedly got paid hundreds of thousands of dollars to do nothing and be a complete asshole! And when his supervisor asked him why he hadn't been at work, Adam Skelos said that he'd "smash" his head in. #LivingTheDream.

Previously, it was revealed that Adam Skelos, the only son of leading Republican State Senator Dean Skelos, received payments from a title insurance company he never did work for, because the business wanted to stay in Daddy's good graces. Adam Skelos was also employed by an Arizona-based environmental technology company bidding on a project in Nassau County (Dean Skelos's backyard), but it's unclear what work he did for them. Now it turns out that a medical-malpractice insurance company hired Adam Skelos, in order to grease the wheels with Dean Skelos.

Adam Skelos was given a $78,000/year job with benefits—after, Bharara's office claims, his dad told the owner that his son needed a full-time gig with health benefits for his family. He started getting paid on January 2, 2013, and on January 10, 2013, his supervisor started wondering where he was—which Son of Skelos did not like! 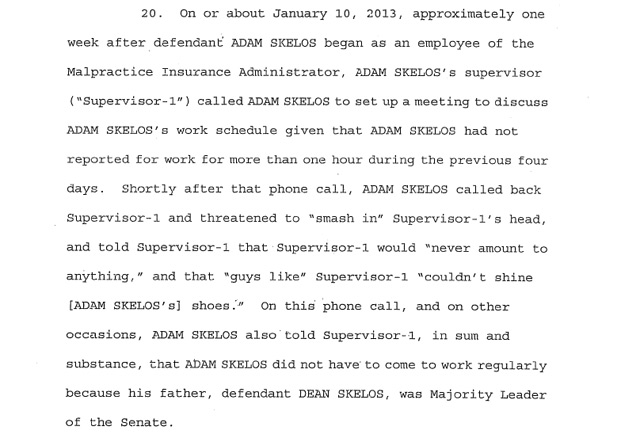 When a lobbyist for the company spoke to Dean Skelos about his son's lack of work ethic, Dean Skelos said that Adam had just bought a house so... ¯\_(ツ)_/¯

Between January 2, 2013 and April 26, 2013, "Skelos worked for three or more hours only on five days during that approximately four-month period, failing to report for work at all on the vast majority of days. During this period, the CEO continued to employ Adam Skelos at full pay and without disciplining him."

In the fall of 2013, Adam Skelos then allegedly asked to turn his onerous full-time work into a $36,000/year consulting gig; the CEO agreed, if Skelos made 100 sales calls a week. That never happened, but Skelos continued to get paid into 2015. To be fair, sales calls are hard.

Also interesting: Dean Skelos told the same CEO in 2012 to use the court reporting service that Adam Skelos's then-girlfriend (now wife) worked for.

Newsday reports, "[L]awmakers tucked a provision into the 2015-16 state budget that benefited Physicians Reciprocal -- a major player in the malpractice market -- and one smaller company... The budget included a provision that prevents regulators from liquidating malpractice insurers that have a negative financial balance. The law has been in place for years and wasn't set to expire until 2016. But lawmakers took the unusual step of renewing it a year early... Just five companies are authorized by the state to offer malpractice coverage to physicians and surgeons and two operate with a 'negative surplus,' according to industry lobbyists and state officials."

The NY Times points out, "Lawyers for the senator and his son did not respond to a request for comment on the new allegations. A website has been established so people can donate to their legal defense. The fund, according to the website, was created to help the Skeloses 'stand up and defeat those who place their own ambition ahead of justice,' and make clear that 'it’s wrong to criminalize the relationship between a father and son.'" Yeah, don't be upset that Dean Skelos is the best helicopter parent EVER.

#adam skelos
#Albany
#corruption
#dean skelos
#nassau county
Do you know the scoop? Comment below or Send us a Tip