At a meeting Tuesday in front of the City Planning Commission, developers behind Industry City in Sunset Park argued for a proposed rezoning that would bring high-end commercial development and a luxury hotel to the waterfront—expanding a so-called "innovation economy hub."

These efforts dovetail with the city's plans for the Sunset Park waterfront, but some locals see only a hipster behemoth threatening to permanently displace local residents, small businesses, and heavy manufacturing jobs.

"The Sunset Park industrial zone has served our largely working class community of color for decades with blue-collar jobs," said Elizabeth Yeampierre, executive director of grassroots group UPROSE, in a statement. "There is nothing innovative about what Industry City is proposing for the property.... What we are seeing is old-school commercial real estate development catering to a privileged minority at the expense of the working class."

Tuesday's meeting was at capacity for hours, with an overflow area for speakers. Testimony will be considered in a draft environmental impact statement for the site—an early stage in the approval process—according to the Department of City Planning.

Historically, Sunset Park, Brooklyn was an industrial neighborhood, home to traditional heavy manufacturing jobs. In 2013, Jamestown Properties, the developer behind Chelsea Market, and other developers bought 30 acres along the waterfront to create what they've billed as "a bustling creative business hub." In the intervening years, Industry City has been referred to as "the SoHo of Sunset Park," as numerous new eateries, retailers, and light-industry manufacturers have set up shop in the 16-building complex. The 450 current tenants include design, media, fashion, and tech firms, as well as Extraction Lab, purveyors of the should-be-apocryphal-but-isn't $18 cup of coffee.

Opponents of the project disagree. Tuesday's hearing included opposition remarks from local residents, artists, and representatives of UPROSE and the Protect Our Working Waterfront Alliance (POWWA). Rezoning will price local residents out of their homes, they say, displace mom-and-pop businesses and industrial manufacturing jobs, and destroying the historical character of the neighborhood. 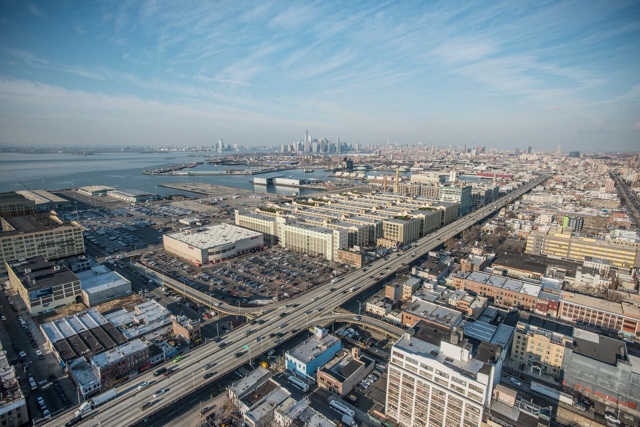 Several Industry City business owners and employees came out in support of the project, arguing that they've been able to create jobs for local residents and minorities. Many of them praised Industry City as a supportive landlord.

Jason DeSalvo, a partner at Fodera, a manufacturer of high-calibre electric guitars, has been based in Sunset Park since 1990.

"It was a really downtrodden area," said DeSalvo, of the early years. "It made it very difficult to attract top talent.... It was unsafe to be in the buildings after dark, there was no place to get something to eat, and there were days in winter when the space was literally so cold that employees could not do the intricate woodcarving that's required of them because their hands were too cold."

"We are not hipsters. We are conscious citizens of the world," added Jennie Dundas, CEO of Blue Marble Ice Cream. "Here in New York City, we are committed to employing a staff that reflects the diversity of our home city."

According to Dundas, eight of her ten employees are minorities; six are women.

The entrepreneurial optimism didn't sway David Galarza, 48, a long-time Brooklyn resident who grew up in Sunset Park. He was priced out when he got married, and now lives in Windsor Terrace.

"I expressed my outrage initially because this is a really difficult time for people of Puerto Rican origin," he added. "Sunset Park is one of the historic hubs of the Puerto Rican community...Rolling out the red carpet for Jamestown and Industry City [is] really insulting."