Some Rikers Guards Are Getting TASERs

The de Blasio administration is equipping select Rikers Island guard supervisors with TASERs as part of what is supposed to be a bid to decrease violence in the jail.

Correction officers currently have pepper spray, batons, and stun shields for subduing violent inmates. The TASERs are supposed to be given only to supervisors with the Emergency Services Unit, which responds to emergencies and fights in the correctional facility.

Thirty-two captains in all will get the stun guns, and are supposed to use them on inmates “who are actively physically resisting or exhibiting physical aggression," to "prevent persons from physically injuring themselves," "and prevent incidents from escalating to the level where deadly force is required," according to a plan obtained by the Daily News.

The weapon buy will be accompanied by a reorganization of the ESU so that teams are stationed in different units, rather than operating out of a centralized command.

"Safety is always our number one priority, and these smart measures will give officers the tools they need to protect their and inmates’ safety," Mayor de Blasio said in a statement "By strategically pre-deploying emergency response teams to multiple locations and equipping them with TASERs, we’re making sure that our officers get critical support in urgent situations faster and more effectively."

A dozen captains will be trained in TASER use in the next few weeks, according to the Mayor's Office.

The less-lethal weapons are currently in use in 23 cities' jails, including ones in Los Angeles, Phoenix, and Seattle, according to the News, and have been sold to more than 18,000 law enforcement agencies overall. TASERs have been hailed as decreasing inmate violence in some jails and prisons where guards have gotten them, and a city Correction Department spokeswoman told the News that's why New York is buying them: "Research on Tasers around the country has shown that their use is associated with reductions in injuries to officers and citizens," Eve Kessler said in a statement.

But even correction guards are not wholly united around the notion of stun guns in jails. As law enforcement purchases of the devices have skyrocketed in the last 15 years, guards have also used them to abuse inmates, and in some cases, kill them.

For instance, sheriff's deputies in Fairfax County, Virginia killed a shackled schizophrenic woman in 2014 by zapping her four times with a TASER when she continued struggling after being put in a restraining chair. Research for the American Heart Association has suggested that TASER shocks can cause cardiac arrest, particularly when officers use them repeatedly, shock people in the chest, or drag the shocks out for long periods. TASER the company has come under fire for downplaying the risk of death in its marketing to law enforcement agencies.

About 40 percent of New York's jail population suffers from some sort of mental illness. 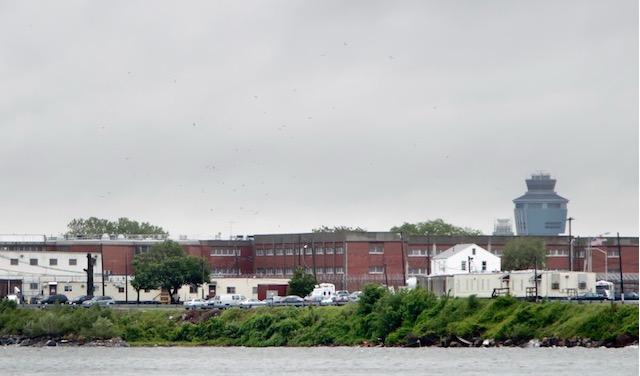 An activist with the group VOCAL-NY, which is calling for the closure of Rikers due to corruption and guard violence, said that whatever happens at other jails, Rikers is a hard case. She predicted the worst for the weapon rollout.

"I think anybody that has studied Rikers knows that deescalation is not really the strong suit of the staff that are working there," VOCAL spokeswoman Alyssa Aguilera said. "The climate and the conditions at Rikers are particularly dangerous, and particularly corrupt. Perhaps the TASERs will have some effect, but it's hard to believe that anything not about decreasing the [inmate] population and closing the facility is a step in the right direction."

Rikers guards already use stun shields, which are basically electrified riot shields, to subdue prisoners in solitary confinement. The shields were brought in by former Correction commissioner Bernard Kerik in 1998, under much the same justification. Kerik declared in '99 that they had "really prevented a lot of injuries." A New York City Bar Association Committee on Corrections report from the early 2000s showed abuse of the technology by Rikers guards, occasional failure to follow protocol, and an abiding aversion to deescalation.

For example, the review found that guards used pepper spray and stun shields in combination on several prisoners, despite a regulation prohibiting that, in part because the electricity can ignite the spray. In one case, a captain sprayed and stunned an inmate who was already handcuffed and on the ground. The shields were frequently used to forcibly extract inmates from cells whose only infraction was refusal to close a food slot, which the authors deduced had more to do with "issues of control and authority, if not a street culture of machismo," than "common logic."

A more recent federal investigation of the facility's treatment of juveniles found similar problems: the feds described "a deep-seated culture of violence" among guards who use beatings and intimidation tactics, not to respond to active or impending violence, but to extrajudicially punish "disorderly or disrespectful behavior.” Brooklyn Defender Services cited these and other findings in condemning the decision to introduce new hardware into the complex.

"Multiple investigations have pointed to management issues and accountability as the primary drivers of violence at Rikers Island, neither of which will be resolved by introducing potentially lethal weapons into the city jails," said director Lisa Schreibersdorf in a statement. "The city should be focused on deescalation and non-violent response rather than new weapons, which will only raise the stakes of these encounters...There has to be a better way."

The move to acquire TASERs did little to appease Correction Officers' Benevolent Association president Elias Husamudeen, who said that the latest announcement is fiddling around the margins while Rikers is short-staffed, forcing some guards to work double and triple shifts, and that the new technology shows the mayor's ballyhooed 14-point violence reduction plan "was a failure."

"Given the amount of direct contact officers have with inmates in New York City jails, deploying TASERs to be carried by a small number of Department of Correction supervisors does little to protect officers or stem the tide of daily violence," he said in a statement. "These announcements are simply a hodgepodge of efforts, and not a real strategy, that will do little to solve the immediate problems on Rikers Island."

De Blasio also announced today that the DOC will install airport-style body scanners at Rikers and other jail facilities, which have faced chronic problems with drug and weapons smuggling by guards. The Mayor's Office points to a 63 percent increase in the number of contraband finds so far this year compared to last as evidence that it is cracking down harder. But wait:

Inmates & visitors, but not guards, to undergo new contraband scan at @CorrectionNYC. Union must OK it for guards. pic.twitter.com/9IphoEkAjw

The city is also in the middle of a $1.2 million contract with the war-games-loving prison supply firm U.S. Corrections Special Operations Group. Among other things, the company is training Rikers guards in the use of pump-action rubber pellet shotguns, though DOC won't say whether it's actually planning to buy the guns.