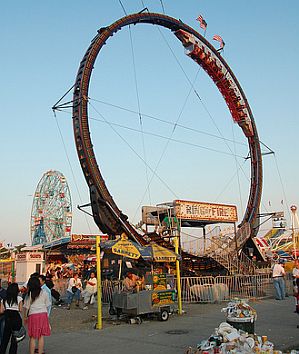 An amusement park ride inspector warns that some of the rides at Coney Island are so dangerous they should not be open for business. Last summer a man died after surgery to heal vertebrae fractured on the Cyclone, but the rides now targeted by “amusement-safety consultant” Walt Reiss don’t include the famous wooden roller coaster.

Reiss, who has previously trained New York City ride inspectors, tells the Post that the “Swingout” ride is so unsafe that, "if I had to sign my name to this ride, I would shut it down." The owner of the company in charge of the ride says he’s passed several inspections with no problems. But Reiss also deems the Scrambler and Ring of Fire rides to be potential deathtraps; the former because safety bars are badly aligned, the latter because of “serious problems” with support beams.

The three temporary rides are all on land owned by Joe Sitt’s Thor Equities, which is pushing a controversial plan to transform Coney Island into a year-round amusement, retail and hotel destination. In its current form, the plan would turn over management of all the rides to a single "world class operator."

#coney island
#cyclone
#dangerous
#deaths
#died
#injury
#inspection
#rides
#ring of fire
#safety
#scrambler
Do you know the scoop? Comment below or Send us a Tip