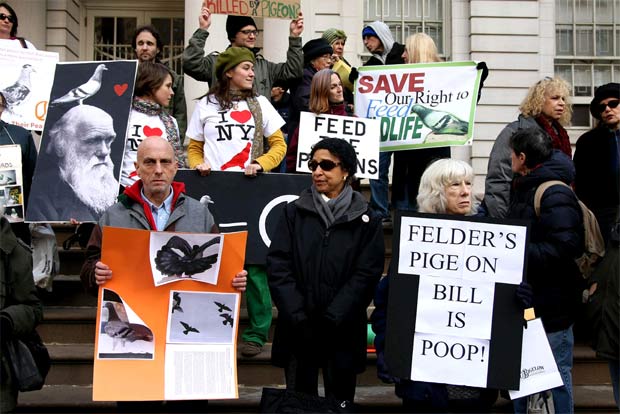 After City Council member Simcha Felder announced he would propose legislation to ban feeding pigeons, bird lovers joined forces and, yesterday, held a rally at City Hall. Armed with posters like "Save Our Right to Feed Wildlife," "Have U Known Anybody Killed by a Pigeon?", "Pigeons are Beautiful Birds," and "Felder's Pigeon Bill is Poop!", the pro-pigeon protesters spoke out for their feathered friends. One demonstrator told City Room, "We are voices for the wildlife in New York City that we would like to preserve."

Felder's reasoning for a stop on pigeon feeding is that pigeon poop - an estimated 25 pounds over a year - damages city infrastructure and suggested the city needs a pigeon czar to deal with the issue. And he's not the only one with the bird on the brain: City Council member James Oddo had suggested pigeon birth control (approved by PETA and the Humane Society), after pigeon poop created gross conditions at the St. George ferry terminal. City Council Speaker Christine Quinn and Mayor Bloomberg also seem to support a ban on pigeon feeding. This week, Felder was the subject of a New Yorker Talk of the Town piece, where he told Ben McGrath:

"Yesterday, I was having lunch in City Hall Park with a colleague, and this squirrel comes over, literally up to my feet, and he stands up,” Felder said. “I’m eating a bar of chocolate. I said, ‘What, are you kidding? You’re with them?’ It ran away, but five minutes later dozens of pigeons, like something out of some spook movie, show up, and they’re all over the place. I said, ‘Get a camera!’" 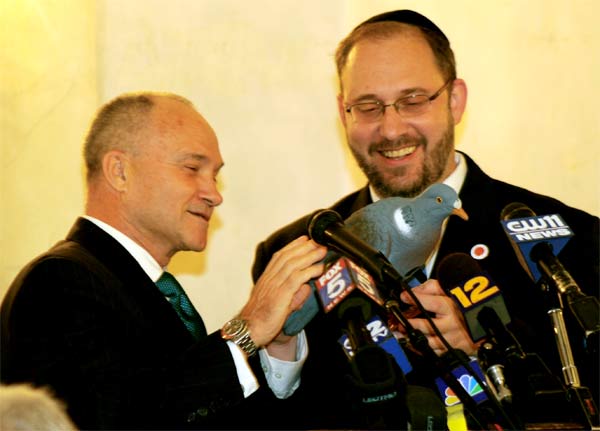 Of course, Felder isn't immune to teasing. The other day, during a community breakfast in Borough Park, Police Commissioner Ray Kelly gave him a plastic bird and a certificate which was, Kelly read, "in recognition of your dedicated work to protect the city from an imminent quality of life danger...Overfed pigeons pose a threat to the safety and well-being of every New Yorker. We are grateful for your leadership and courage in raising awareness of this issue." Kelly was joking. We think.

Top photograph from the pigeon rally by
Mira (on the wall) on Flickr, bottom photograph of Commissioner Kelly and City Council member Felder by Eli Shapiro