Some Lines For Gas Stretch 22 Blocks, Twitter Tries To Help

The gas shortage hitting the east coast in the wake of Hurricane Sandy continues, with everyone from regular drivers to Papa John's delivery guys affected. Still, Mayor Bloomberg says, "I think by Monday most of it will have gone away." And if you know where to find gas in the city? Well, there is a hashtag and affiliated user-generated map for that! Oh, the internet.

There are a number of reasons for the current gas shortage—power generators and lack of mass transit upping demand, hurt refineries and damaged infrastructure shrinking supplies—and those are being worked on. But it takes time. And in the meantime, there has been some violence because of the demand:

"I’ve been pumping gas for 36 hours, I pumped 17,000 gallons," said Abhishek Soni, the owner of an Exxon in Montclair, where disputes on the line Wednesday night had become so heated that Mr. Soni called the police and turned off the pumps for 45 minutes to restore calm. "My nose, my mouth is bleeding from the fumes. The fighting just makes it worse." 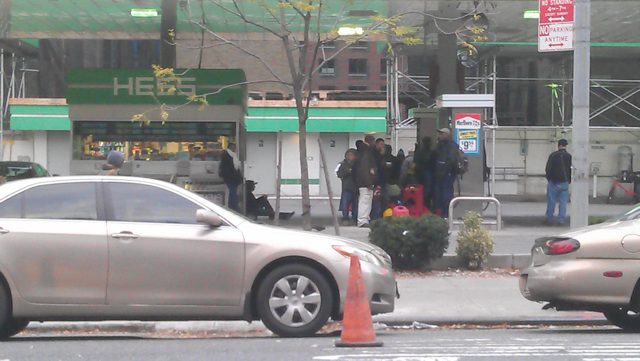 On the plus side: gas is not going to be a problem for emergency services. Yesterday City officials reached an agreement with a supplier to ensure that emergency operations will get gas uninterrupted. Meanwhile in New Jersey, Governor Christie temporarily waived restrictions on bringing fuel in from other states and the EPA has temporarily waived clean-fuel requirements for 17 eastern states. And gas is flowing into our ports again thanks to waivers on other trade rules from the feds. So this should be over in the next few days! 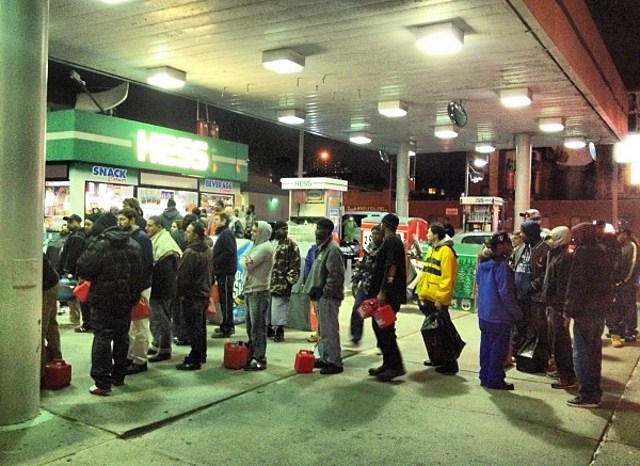 On the negative side: the shortage is still with us now. This line in Brooklyn is 22 blocks long. Which means a reduced taxi fleet, livery cabs denying rides because they don't have the gas to get back, and serious concerns about getting commercial food supplies into and around the city. Not to mention food deliveries. One tipsters wrote in to tell us that last night they tried to order pizza from the Crown Heights Papa John's. Their order online went through successfully but then a manager called 30 minutes later to tell them it couldn't be delivered. So the poor man and his sick wife had to go "to the shitty local pizza place." Yes, they insist it's somehow shittier than Papa John's.

Meanwhile, there are things you can do if you know where there is gas. Namely, follow Councilman David Greenfield's advice and write it up on Twitter with the hashtag "#NYCgas"—those addresses are then being listed on the New York Taxi Workers Alliance website.

#frankenstorm
#gas
#gas shortage
#hurricane sandy
Do you know the scoop? Comment below or Send us a Tip