Some Council Members Keep City Money in the Family 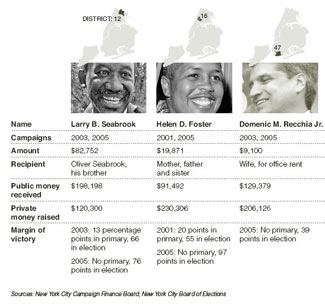 As the City Council reels from slush fund mess and other budget scandals, the NY Times found more 12 of the 51 City Council members, or approximately 25%, were using campaign funds to pay relatives or themselves. One aid to familial lining of pockets is the fact that taxpayers are filling campaign war chests with cash, even when Council Members are running unopposed or face barely credible challenges.

For instance, Larry Seabrook, representing the Bronx, paid his brother almost $83,000, despite easy wins (he won his seat with margins of victory of 66% and 76% in '03 and '05, respectively). During those two campaigns, Seabrook raised $120,000 in private campaign donations and received $198,000 from taxpayers. The Times has a graphic outlining some money is kept in the family--the members generally argue that they need completely trustworthy staff).

It's against the law for Council members to pay relatives directly with city subsidies, but the fungibility of campaign cash makes it nearly impossible to prove this is ever done. And sometimes members have to pay relatives--Peter Vallone Jr.'s brother, a lawyer, did some work for him, and Vallone paid him $7,500, or else the hours would have counted as an "in-kind" contribution.

Overall, 36 of the 51 Council Members are up for re-election or leaving an open seat in 2009 and everyone's scurrying for cash to fund their campaigns. And remember this: With city taxpayers donating $6 to City Council members' campaign funds for every $1 privately raised, that money is coming from you, whether you like it or not.

Image a portion of NYTs graphic