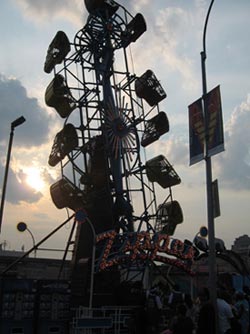 While the future of Coney Island is still up in the air, some rides are already closing for good. The Post reports that the Spider and Zipper were packed up for the last time in their Coney Island location. Without an extension of their leases for 2008 from Thor Equities, the new owners of the land, workers began dismantling the two rides yesterday. The rides were sold by their owner and are destined for warmer pastures in Honduras. The owner of the Spider and Zipper was told before the season that their lease would not be renewed.

Naturally, the news that the owner of the Spider and Zipper didn't get a lease renewal for next season has other ride owners concerned. One owner told The Post, "I think people are in denial about what we're facing for next year." Thor Equities, which has a development $1.5 billion plan in place for Astroland and the surrounding areas, still doesn't have approval from the city. It was thought that Astroland, which the Spider and Zipper are not part of, would get a chance to stay open for 2008, but those plans are also in question. Even before the 2007 season started, amusements like the batting cages and go-kart were closed.

Astroland is still open on weekends from now until mid-October, so head down if you want to get what could be your last trip ever.