On May 17th, police officers and Department of Consumer Affairs officials armed with tape measures began ticketing street vendors selling jewelry, cell phone cases, and hot dogs on Broadway between Spring and Grand Streets, forcing them to vacate their hard-won spots and confiscating their wares. Tomorrow, five of those vendors are suing the NYPD and the City for taking their property illegally. "The City is not allowed to seize their property for the types of violations these vendors allegedly committed," the vendors' lawyer, Matthew Shapiro says. "To have your property taken from you in public is humiliating, and in this case it wasn't even legal."

The suit will ask for monetary damages for the vendors for "violations of their constitutional rights, lost income, and property damage." Shapiro, a lawyer for The Street Vendor Project, said that most of the tickets written during May's raid ended up getting dismissed, and calls the DOCA rules [PDF] regulating what authorities can or cannot seize "arbitrary."

For instance, licensed vendors are not allowed to have stands that are taller than five feet, and may not be within 20 feet of any retail store entrance, but police may not seize their property in such instances. However, if a stand is within five feet of a bus stop, or if it is longer than eight feet and three feet wide, police may confiscate the vendor's property. Shapiro says one vendor was cited for being too close to a bus stop, but that no tickets were written for the length violation. 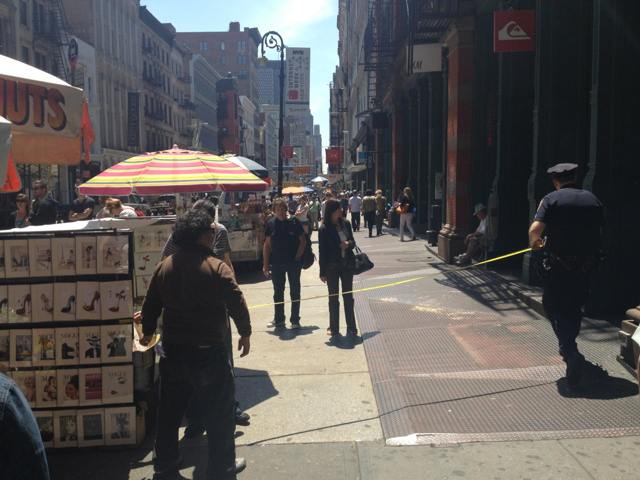 Cops with tape measures descend upon vendors in SoHo (Gothamist)

Plaintiff Abibou Gueye, who has been selling sunglasses in the area for seven years, had his merchandise carted away for having a stand that was deemed too tall. "I have the best spot because I'm 20 feet away from all the entrances," Gueye explained at the time. "I'm right in the middle of Broadway and this has never happened. They're just doing this to show us that they have the power—and its not right."

Other plaintiffs include Donna Balda-Andaloro, a resident of Thompson Street who has been selling jewelry at Broadway and Spring for eight years, and Md M. Haque, the suit's only food vendor plaintiff, whose hot dog stand was deemed to be within 20 feet of a retail store. Most of the vendors had their property returned the next day, but one waited several days before being able to retrieve it.

"There are some people who live in the neighborhood who aren't happy with the vendors there, and the police react to that," Shapiro says, referring to the neighborhood groups that advocate for tighter regulation of street vendors. "Street vendors make the streets more lively, and they have their eyes on the street," Shapiro adds, pointing to the vendor in Times Square who alerted police to a potential terrorist attack last summer.

Those benefits are bogus, SoHo Alliance director and longtime Greene Street resident Sean Sweeney says. "How could you possibly make this neighborhood more lively?" he laughs. "I would add that Sean Basinski, the head of the Street Vendors Project, has no peddlers on his block on the Upper East Side...I've had my property taken by the NYPD—my car was towed for parking in a no parking zone, I paid my $150 towing fee and that was it."

When asked about the questionable legality of the NYPD's seizures, Sweeney replied, "I applaud the police department for enforcing the laws when the laws are plainly broken, as they often are in that area."

Nonetheless, Shapiro, believes the City's actions were unwarranted. "We're filing this suit to let the city know that they can't just take these vendors' property without cause."

#broadway
#department of consumer affairs
#nypd
#soho
#street vendors
#original
Do you know the scoop? Comment below or Send us a Tip
A new Gothamist is coming! We’ve moved comments over to our beta site. Click here to join the conversation and get a preview of our new website.