While some Citi Bike detractors have refocused their wrath at the malfunctions of Citi Bikes themselves, one group of SoHo residents are continuing their fight to have a single docking station removed from Petrosino Park, and on Wednesday announced that they've filed a lawsuit against the city to have the 43-slot rack relocated down the street.

"You are not anti-bike, you are pro-park," said lawyer Jim Walden, who filed the injunction on Wednesday, summing up the sentiment of the roughly two dozen people gathered to protest the racks. Walden, you may recall, is the same high-profile attorney representing Park Slope residents in their lawsuit against the Prospect Park West bike lane.

The park, located on a small triangle of land between Lafayette and Kenmare streets, has been jealously guarded by residents since undergoing a $2 million renovation in 1984, transforming it from a derelict haunt to a well-appointed plaza where artists could showcase their work. Residents who recall the park prior to renovation are particularly agitated by the arrival of Citi Bike, which to them represents a hostile corporate takeover of public space.

"This is our neighborhood, and if you don’t fight for keeping your public space, they’re going to take it away, inch by inch," said William Skillman, a horticulturalist who has lived in the neighborhood for more than 20 years. "And look at what we get. Citi Bike. All over the freaking place." 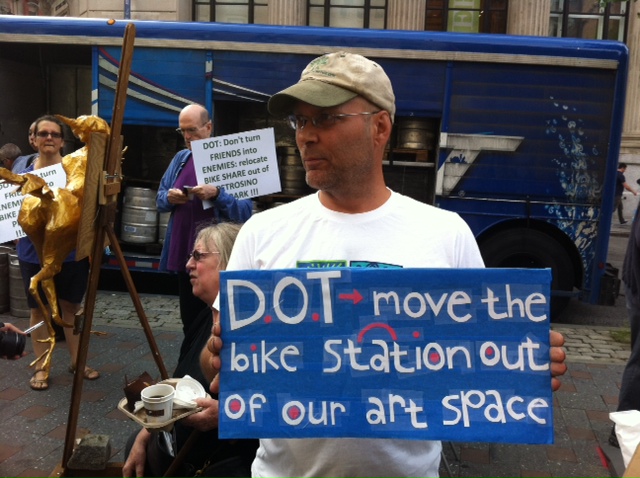 Resident William Skillman wants the racks transferred from the park to a different location down the street. (Lauren Evans/Gothamist)

Perhaps the most outspoken critic of the rack is Minerva Durham, who owns nearby Spring Studio and said in the past that she's "willing to die" to get the racks removed. She's already lost around $2,000 by holding free art classes—which typically run $17 per session—in the park as an act of protest. But Durham clarified that she's not against bikes—only the location of the racks.

"I rode a bicycle all my life—I’ve never had a car...I believe everyone should ride bikes," she said. "I’m a green person all the way through. I recycle everything. So it’s ridiculous to make me out as an enemy. We’re not enemies of bicycles. How could you be against a bicycle? That’s crazy."

Her affection for bicycles notwithstanding, Durham said she's uninterested in sharing the space, likening it to being forced to share a bed with an unwanted guest.

"You’re sitting in your bed, a man moves in, he says 'I’m sharing your bed with you. Can’t you share? You can’t share?' It sickens me," she said. "Now this is all road bed, and a depot for bikes. That’s all it is."

Walden, the attorney, said the law is on their side. "It's a slam dunk case," he told us. "The law is so abundantly clear that you can’t give away park land—especially for a commuter program. We’re very confident in the merits of the lawsuit."

DOT did not immediately respond to a request for comment.

Park advocates have proposed the east side of Lafayette Street, just north of Spring Street, as an alternative location for the racks. Mallory Kass, who rides Citi Bike each day from her home in Brooklyn Heights to work in SoHo, said that while having the racks safely tucked in Petrosino was probably safer, she wouldn't mind if they were moved up the street.

"I wouldn't stop riding, though I would feel less comfortable pulling up at the next intersection," she said. "But I’d be happy to make that concession."

#citi bike
#petrosino park
#petrosino square
#public art
#original
Do you know the scoop? Comment below or Send us a Tip