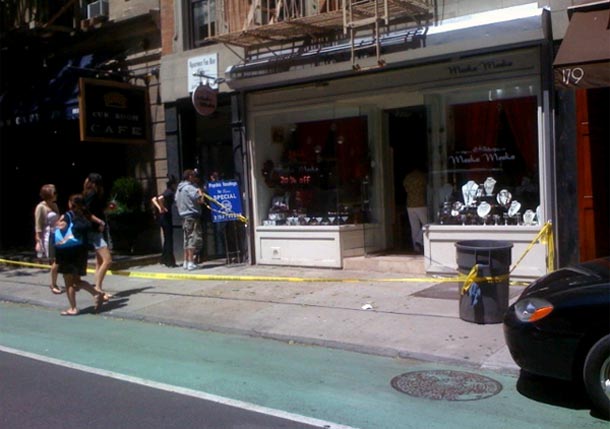 Yesterday, police scoured Soho for clues after a 19-year-old was sexually assaulted in her apartment building on Prince Street near Sullivan. Police Commissioner Ray Kelly confirmed the victim was followed home from the subway station by the attacker:

"She was followed by an individual who asked her for a cigarette. She did give him a cigarette. She went into her residence; he followed her upstairs. He then accosted her, dragged her downstairs, and sexually assaulted her."

The suspect used a box cutter to threaten her. After he fled, the victim "crawled up to her apartment" where one of her roommates called 911. She was taken to Bellevue for her injuries.

Kelly said it was unclear if yesterday's attack was related to a sexual assault on Sullivan Street in April. The suspect is described as a black man, about 5'8" and 200 pounds, with a possibly pockmarked face, and he may be between 20-30 years old. The News reports "Law enforcement sources said the suspect may have a speech impediment or a heavy accent."

Kelly also explained the spike in rapes (before yesterday's attack, here have been 6 rapes so far this year--compared with 3 during the same period in 2007) was because the neighborhood has become more residential. Still, one resident told the Post, "This is getting scary. I feel like predators are all around here. My husband and I talk about moving all the time. We don't want our children exposed to this."