A jury found the son of an Oscar-winning composer guilty of murdering his girlfriend at the Soho House in 2010. Nicholas Brooks, 27, had strangled and drowned Sylvie Cachay in a bathtub at the club. 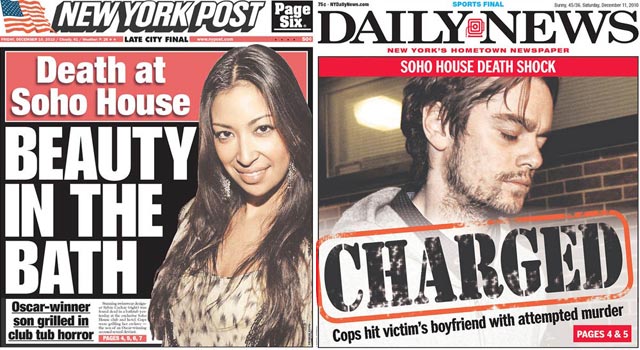 While Brooks' lawyer claimed her death was accidental, the ME's findings showed that "bruises on her neck, bleeding in her eyes and abrasions inside her mouth from chewing her lips - injuries consistent with asphyxiation." Further, the couple had a volatile relationship—prosecutors pointed to an email Cachay, an aspiring swimsuit designer, sent to Brooks, demanding that he stop being a hard-drinking, pot-smoking slacker. In another email, referring to his cheating on her, she wrote, "Nick, for the past six months I have supported you financially and emotionally. I am speaking with the credit card company and the police and I am going tell them that I never allowed you to use my card. I don’t care. Have fun in jail. Sylvie."

Cachay's family cried when the verdict was read. The Post reports that Brooks "rubbed his chin and looked annoyed," while his sister, who made a scene during one day in the trial (calling a witness for the prosecution an "awful bitch") broke into sobs. Brooks' father is Joseph Brooks, who won an Oscar for writing "You Light Up My Life"; Joseph Brooks committed suicide in 2011, amid accusations he sexually assaulting numerous women.

#guilty verdict
#murder
#nicholas brooks
#soho house
#soho house murder
#Sylvie cachay
Do you know the scoop? Comment below or Send us a Tip
A new Gothamist is coming! We’ve moved comments over to our beta site. Click here to join the conversation and get a preview of our new website.