Last month, Democratic Socialist and State Senate hopeful Julia Salazar was forced to explain why, as an 18-year-old in Florida, she initially registered to vote as a Republican. "She had conservative views at the time of graduating high school," her campaign spokesperson told the Daily News. "But they quickly changed as she went to college in 2009."

Salazar's evolution on the issue of reproductive rights, however, was less swift. As a junior in college, she served as the president of Columbia Right to Life, where she actively fought to ensure that a fund for abortion services would not be paid for by Columbia students, according to those involved in campus organizing at the time.

"We didn't establish an abortion fund, in part because of some of the concerns of Right to Life, which was led by Julia and basically singularly opposed to this," says Zoe Ridolfi-Starr, the lead activist with Columbia Democrats during the controversy. "It was a tense fight, and the stakes felt high... the funding sources changed because of the concerns expressed by Right to Life.”

Salazar, who's running for the North Brooklyn state Senate seat against eight-term incumbent Martin Dilan, told Gothamist that she regrets her former views on abortion, which were the result of being "exposed almost exclusively to reactionary right wing media and political discourse" during her childhood.

But while the 27-year-old candidate now stands firmly in support of reproductive rights, Salazar's early views on abortion persisted throughout most of her time at Columbia.

In 2012, she became the public voice of the Right to Life group, after the university quietly dropped abortion services from its mandatory Columbia Health Program fee—a move necessitated by Affordable Care Act provisions, according to Columbia officials. While coverage would still be offered through the school's voluntary insurance plan, Ridolfi-Starr and the Columbia Democrats called for a new policy, citing concerns that students who lacked insurance or were on their parents' plans might not have access to financially protected, confidential abortions.

That's when Salazar and the Columbia Right to Life group got involved, arguing that students shouldn't have to pay for procedures they were ideologically against. Salazar was quoted in opposition to the mandatory fee in multiple student newspapers, and at one point told the Empire State Tribune that articles on the subject in the Columbia Daily Spectator were "biased."

Ultimately, Columbia struck a compromise: agreeing to keep abortion separate from the mandatory fee, while setting up a discretionary fund to cover "special, time-sensitive healthcare needs." Both parties embraced the decision, with Salazar explaining to the Spectator, "It doesn't demand that every student in the Columbia community contribute to something that they may not be comfortable supporting, that may be a moral issue for them, as it would be for me."

Asked about those comments on Sunday, Salazar was open about her former "repressive and conservative" views on abortion, but maintained that the pro-life group didn't have any significant impact on school policy. "We weren't doing anything to complain to Health Services or the administration about the abortion fund, but we were ideologically opposed to it," she told Gothamist.

New York is a blue state, so why are our abortion laws so outdated? We need to immediately pass the Reproductive Health Act which will:

Her political awakening happened soon after, she says, when she spearheaded an initiative to increase resources for pregnant students on campus, and penned an op-ed in the Spectator lamenting the "lack of support that 'pro-life' students receive."

"In the wake of that op-ed being published, I was having conversations with my peers and thinking more critically about abortion," she said. "That was part of a generally leftward political trajectory—becoming a socialist among them."

Within a year, she became involved in tenants rights activism, and organized a rent strike in her Harlem apartment building. From there, she joined the Democratic Socialists of America, eventually securing an elected position on the socialist feminist working group, while taking a job as a full-time organizer with Jews for Racial & Economic Justice. 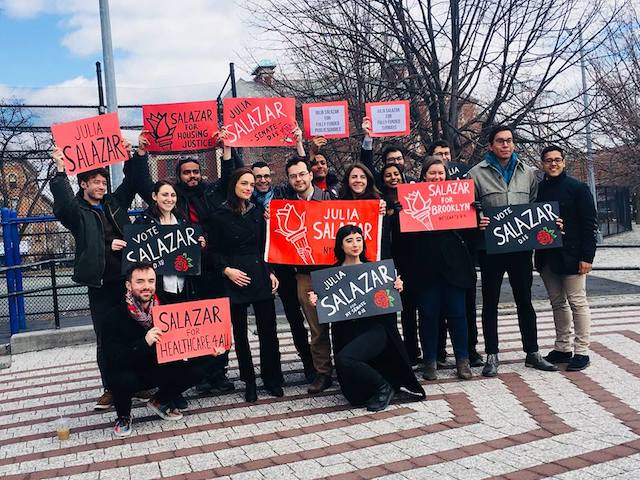 (Courtesy of the Julia Salazar for State Senate Facebook page)

Today, Salazar says that she supports passage of the Reproductive Health Act and wants to see "abortion free at point of service across the state of New York." She's also backing decriminalization of sex work, single-payer health care, universal rent control, and expanded rights for immigrants—positions that have earned her a raft of endorsements from progressive groups like Make the Road, the Working Families Party, and the DSA, along with at least one former rival.

"I've been really impressed with the talks about reproductive justice, and how she's including sex work in that," Ridolfi-Starr told Gothamist. "I'm convinced these aren't just politically advantageous positions for her."

Salazar has also netted widespread media attention—an unusual amount for a State Senate candidate—thanks in large part to Ocasio-Cortez's historic upset against Joe Crowley. Both are millennial Latinas with the support of the party's energized leftwing, and both have become young avatars of the movement for democratic socialism. Referring to that DSA endorsement, Dilan told City Limits last week he wasn’t really running against Salazar, because "my opponent is this national organization that's supporting her." (Neither the state Senator nor the DSA immediately responded to Gothamist's request for comment).

Asked about her increasingly visible role within the DSA, and whether her pro-life past could potentially hurt her support among mainstream Democrats, Salazar demurred, and highlighted at least one benefit of her unusual ideological trajectory.

"My own experience of political evolution as a young adult has made me more empathetic to other people coming around," she said. "It's important to be willing to engage with people who experience similar evolutions. That should be the goal of our political project."