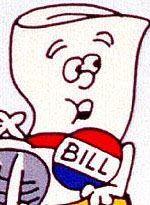 Gotham Gazette has a fantastic analysis of what happens to the hundreds of City Council bills that have been introducedsince Christine Quinn become the City Council Speaker. The article points out many interesting things. For instance, out of the 622 bills introduced, 68% of them are never heard of again. About 15% do get hearings, but are never voted on, and only 17% actually pass to become bills.

The article also lists the top ten City Council members who introduce the most bills. Number 1 is Peter Vallone Jr, who has introduced 54 bills, including the anti-voyeurism bill and banning pit bulls, (14 have passed), while number 9 is Speaker Quinn, who has introduced 37 and passed 28. Her 76% bill-passing rate, which also translates to the statistic that she alone has "introduced 27 percent of the bills that have become law," speaks to her power.

Bills can pass more easily if they are supported by more senior Council members, such as ones who sit on influential committees, and if the Speaker supports the bill. City Council member Tony Avella attributes his low bill-passing rate - 10% - to the fact that he doesn't "fall in line no matter what," noting, "If you're independent and you speak your mind you get punished." The example GG cites is interesting:

Avella has accused Quinn of intentionally blocking his legislation, such as a 2006 bill that would have required the replacement of damaged stop signs within 48 hours. The council last week adopted similar legislation, which requires the replacement of all missing and damaged street signs within three days. The sponsor of that bill was Joseph Addabbo.

Sometimes members propose bills to raise awareness or maybe to get their name out there. Sometimes ideas don't even make it to the bill stage because the Council has other strategies. City Council Darlene Mealy said, "The City Council staff will let you know whether it's good legislation or bad legislation. All I'm going to say is it's not what you know, it's who you know."