So About That Sinking LES Sidewalk Next To The 80-Story Luxury Tower Construction Site...

Extell, the favorite developer of oligarchs worldwide, is having a complicated couple of days. First, they got served a stop-work order Wednesday because construction on their 80-story 250 South Street condominium tower was causing Cherry Street to collapse. Now, it looks like the developer is going to have to rip up all of Cherry Street and repave it.

“They’re going to rip up and replace the block. It may be just the sidewalk near the construction site, but it looks like it’ll be the entire block,” a source familiar with the project told us.

Our source couldn't confirm when reconstruction would start on Cherry Street, though it’s likely that it will begin soon, given the troubling amount of damage that’s already visible along the block. 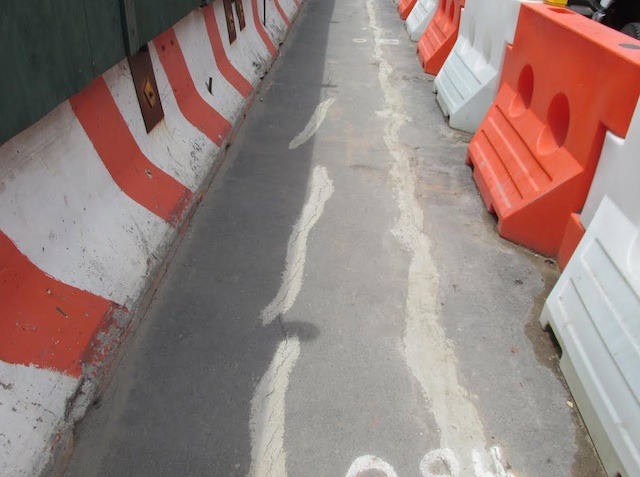 Bowery Boogie estimates that the street has sunk between 2 and 3 inches as a result of construction at the site. Along the block, Extell’s construction workers installed shoring braces to hold up the street and poured asphalt to level the cracking pavement.

Earlier this week an Extell spokesman told us, "As is typical with the excavation phase of any construction project, adjacent movement may occur. Our construction manager, Lend Lease, has controls in place to monitor such conditions and interim repairs are performed as necessary. Lend Lease and their subcontractors have performed the repairs and have been monitoring such effects and will continue to ensure that they are within the bounds of safety and acceptable standards."

Full construction on the monstrous edifice, however, has resumed, as Wednesday's stop-work order was fully rescinded today, according to a DOB notice posted at the site. Workers were busy Friday afternoon extracting groundwater and constructing Extell’s obelisk, a monument to the Lower East Side’s gentrification that stands directly in front of a NYCHA apartment complex.

An Extell rep didn't immediately respond to a request for comment.