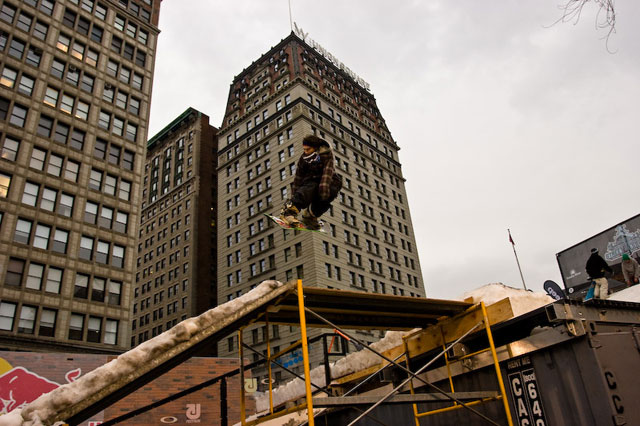 Perhaps the only place you'll see snow in New York City this winter is today in Union Square and this weekend in Central Park. On the north end of Union Square, where the farmers market and skateboarders usually are, there's now a man-made hill with 132 tons of snow trucked in from Mountain Creek in New Jersey. The Union Square Street Sessions, which made its debut last year, has 20 competitors vying for $30,000 in prize money today.

The balmy temperatures yesterday made things a little tricky, but riders took to the hill this morning for a little demo of things to come in the afternoon. Starting at 3 pm, there will be a "festival" with music, demos and giveaways. At 4:30 pm, the first round of the rail jam competition starts. Assuming things remain on schedule, the semi-finals will be at 6:30 and the finals running from 7:30-8:45.

If the Union Square Street Sessions make you crave some more snow, this Saturday is the Central Park Winter Jam. Saturday's events include fun for the entire family - sleding and tubing on a two-story man-made "hill". While it will surely be fun for the kids, just writing that makes us long for some real snow. Winter Jam will also have a snowboarding competition, the Rail Jam Open.