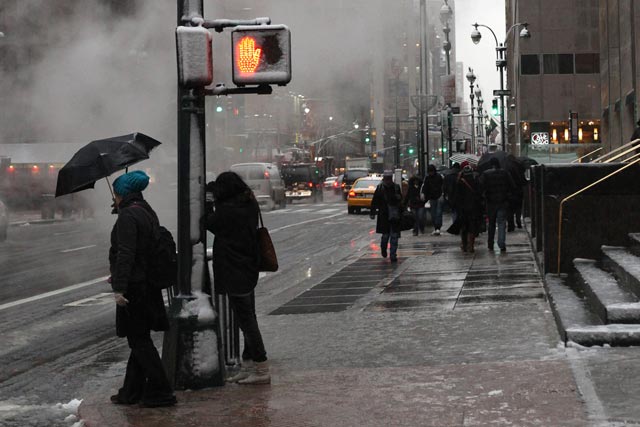 Yesterday's snowstorm brought a reported 6 inches of snow to New York City. Some think it was closer to 4 inches in Manhattan, with the Bronx getting as much as 7 inches.

The Post reports that one woman was in critical condition after a truck hit her when she crossing West 48th Street at Ninth Avenue in Midtown yesterday morning. Mayor Bloomberg, who promised streets would be plowed, urged people to take into account the icy sidewalks, "Walk gingerly." (He also said, "There's really no reason to stay indoors. Get in the last-minute shopping - the stores need the business.") Hundreds of flights were also cancelled at the area airports.

And it's not over: WCBS 2 meteorologist Megan Glaros noted that today, "A few flurries are continuing across parts of Staten Island, Brooklyn and Queen. As we look up into the lower Hudson Valley we have a few flurries, but for the most part the storm system has pushed on off to the east... [However] We're still dealing with what is left from all that snowfall that we picked up, and some of that is now frozen on the roadways." Tomorrow, up to 4 inches of snow is expect: "a snow and rain early, turning into freezing rain and snow in the afternoon."

#snow
#snowstorm
#weather
Do you know the scoop? Comment below or Send us a Tip
A new Gothamist is coming! We’ve moved comments over to our beta site. Click here to join the conversation and get a preview of our new website.