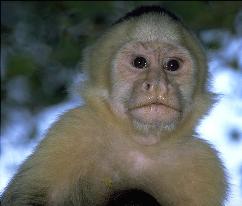 Can someone's religion shield her from charges for smuggling bushmeat into the United States? The NY Sun has a fascinating article about the case of a woman who is facing criminal prosecution for bringing "steaks of monkey meat" from Guinea to NYC. The Scopes Monkey Trial, this is not, but Milbank, Tweed Hadley & McCloy is representing Mamie Manneh on a pro bono basis.

Manneh was arrested when she brought 65 pieces of smoked bushmeat, including the skulls, limbs and torsos of "green monkeys and hamadryas baboons." The boxes containing the meat were labeled "African dresses and smoked fish." Manneh had initially denied any knowledge of the bushmeat, but when investigators found monkey limbs in her Staten Island home, she said someone sent her the goods.

Her lawyers are going to argue that Manneh's religious beliefs, a combination of Christianity and African religions, require her to eat monkey meat during certain ceremonies. The Sun offered this exchange from the trial:

"Frankly, I sort of analogize it more just in my own personal experience with certain foods that you might have at something like a seder ... you know, bitter herbs and that might have some reference to the Exodus or something along those lines," Jan Rostal, an attorney for Manneh, told the judge earlier this month, according to a transcript.

Judge Dearie responded to the reference to the Jewish Passover festive meal by saying, "It sounds like we're going to have an interesting hearing," according to the transcript.

Manneh's church also submitted an affidavit explaining, "This is something our forefathers did, it is something we learned as children, and it is a part of our treasured relationship with God as African Christians." However, while Manneh may be entitled to religious freedoms, a law professor suggests that the government has a strong case because there are public health issues associated with eating meat from primates as well as conservation issues.

Manneh is also serving a prison sentence for assaulting a woman outside a Staten Island movie theater. Manneh drove her car towards her husband and a woman she suspected was her husband's girlfriend; the husband got out of the way, but Manneh managed to hit the woman.