Smugglers Caught at Airports with Birds 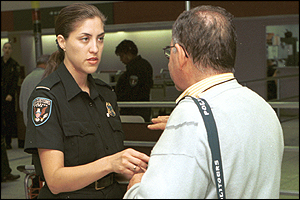 The tabloids have caught wind of a bird smuggling operation uncovered by customs officials at JFK airport: For years now people have been sneaking Guyanese finches called Towa Towas into New York. The birds are used by Brooklyn’s Guyanese community for singing competitions; people place bets on two birds, and a judge decides which one has the lovlier song. (Here’s YouTube video of a Towa Towa singing.)

According to the Post, a Brooklyn man was finally arraigned on Monday after his arrest in 2006; he’s charged with trying to smuggle 13 Towa Towas into New York. (Customs officials at JFK found the birds in his luggage hidden inside plastic hair curlers.) Another man was caught in April trying to sneak 6 of the finches in, and a third man, Guorong Li, was arraigned Wednesday after being arrested for smuggling eight Chinese songbirds, called Hwamei, and one Mongolian Lark. The birds were found in tiny cages inside his luggage. A spokesman with the Division of Fish and Wildlife tells the Post that “the real concern here is the smuggling of live wildlife into the country that may be carrying disease.”

And in other airport customs news, a New Jersey construction worker who came to the U.S. from Ghana twenty years ago with $50 in his pocket says customs officials won’t return the $128,000 he was trying to bring back to Africa to build his dream home. Sam Baah was stopped at Newark airport in March with a suitcase packed with his “life savings” – he was not aware that any cash amount over $10,000 must be declared. After a lenghty interrogation, officials let him take $300 and sent him on his way; now he says the money is lost in a bureaucratic black hole. Eyewitness 7 reports that the same thing happened to a Guatamelan dishwasher on his way back home with $59,000 – two years later, Uncle Sam still won’t give his money back.