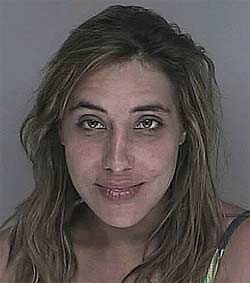 Get this woman a reality TV show! Christina Szele of Woodside, Queens created such a disturbance during a Jet Blue flight from JFK airport to San Francisco that pilots diverted the plane and landed in Denver, where federal authorities took her into custody. According to an affidavit obtained by the Smoking Gun, things started to go sideways after a flight attendant noticed Szele waiting on line for the bathroom with a book of matches and a cigarette, which were promptly seized.

Since smoking in the bathroom was nixed by the uptight flight attendant, the 35-year-old Szele – who sounds like a perfect match for Sean Penn – simply returned to her seat and “nonchalantly” lit up there. When a second flight attendant, one Paul Whyte, snatched the cigarette from her lips, she flew into a rage, firing off the N word and threatening to kill Whyte, who is black. The attendants subsequently moved her to the front of the plane and flex-cuffed her.

But no plastic handcuffs are strong enough to restrain Christina from Queens – she wriggled free and punched Whyte in the jaw! Attendants successfully restrained her with a second set of flex cuffs, and the flight was then detoured. In her statement to authorities, Szele blames the flight crew for serving her three vodka tonics, and insists she has no recollection of smoking or punching anyone. (The affidavit cites other passengers who confirm the flight crew's accounts.) She faces up to 20 years in federal prison and a fine of up to $250,000 if convicted on charges of interfering with a flight crew and assault.