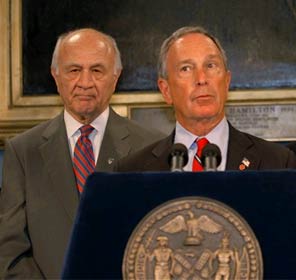 Yesterday, the city announced that cigarette smoking by construction workers most likely caused the seven-alarm fire at the under-demolition Deutsche Bank building that claimed the lives of two firefighters on August 18. FDNY Commissioner Nicholas Scoppetta said, "Smoking was engaged in throughout the building, and particularly on the 17th floor, where the fire originated."

However, the FDNY was not entirely blameless in the incident. It was revealed that the FDNY did not keep up with inspections or heed recommendations for a plan to fights fire at the building on 130 LIberty Street and three fire officials were demoted in the wake of the investigation. Deputy Chief Richard Fuerch, Battalion Chief John McDonald and Capt. Peter Bosco were reassigned to FDNY headquarters and Mayor Bloomberg noted that Fuerch had, per the Times, "decided against drawing up a site-specific firefighting plan."

Fire union Uniformed Firefighters Association said that Fuerch, Bosco and McDonald's reassignments were a "knee jerk reaction." The half-brother of one of the fallen firefighters told the Daily News, "It's premature to be pointing fingers [and] the last people I'm going to blame are the Fire Department. Bobby [Beddia, a 23-year FDNY vet] would've gone in there no matter what." And Uniformed Fire Officers Association president John McDonnell says that contractor Bovis Lend Lease had claimed a standpipe, which carries water for fires and was missing a 20-foot piece during the fire, was in working order.

The city may hold more fire officials accountable, though it's unclear whether Commissioner Scoppetta will step down as some papers have been suggesting. And during his press conference, Mayor Bloomberg also said:

"As we are all painfully aware, we buried two firefighters last week. They were brave men, who served this city with honor and distinction. They took risks in their line of work. Everyone understands that. But we have an obligation to them to reduce those risks wherever possible.

"As a city, we failed to do that. The failures have many owners. They are both in the private sector and the public sector. My job is to oversee this City government - so we have been focusing on the City agencies involved with these tragic events.

"I am not interested in finger-pointing. I simply want to fix what is broken. That's why we have spent a lot of time over the past 10 days trying to account for those failures, trying to determine what specifically the obligations of this government were ,and to take steps necessary to prevent these failures from occurring again."

Here is the FDNY's response and new procedures in the wake of the fire. The city will also be making sure that demolition work will not undermine the FDNY's ability to fire fires.