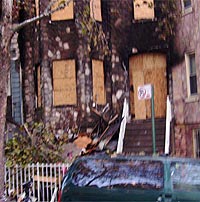 Fire officials say a smoke detector had been unplugged and its battery removed in the Brooklyn apartment where a fire left a 33-year-old man and his 12-year-old nephew dead early yesterday morning. It was second fatal fire from the weekend, after a fire in Manhattan's Chelsea neighborhood claimed the lives of five family members.

Guyanese immigrants Shawn Monderson and nephew Ceimon Fraser had just moved into the apartment last week, because it was closer to Monderson's work as a school bus driver, according to the Daily News. Monderson, who had just become a U.S. citizen last week, was Ceimon's legal guardian because his mother had returned to Guyana. Uncle Frederick Monderson said, "It's a family tradition that we look out for each other...As a young working man, he stepped up and did what he had to do for Ceimon. He was like his father."

Fire officials also said that a candle in another apartment started the blaze at 1214 Hancock Street. The News adds that, per residents in the building, it had been "converted into a roominghouse where tenants shared bathrooms. It was unclear whether the conversion was legal." And relatives are caught between their mourning and worrying if they can pay for funeral arrangements.