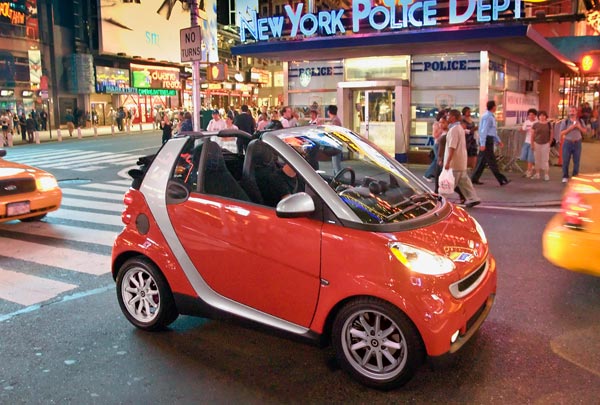 Perhaps it's the high cost of fuel or the difficulty to find parking, but the arrival of the Smart car has some New Yorkers very excited. The compact car first made its debut in New York at the MoMA, but should be in showrooms in late January. Mercedes Benz parent company Daimler says that over 30,000 people have paid the $99 to reserve one of the $15,000 cars and The Post says many of the Smart cars are coming to NYC. One city resident even put the deposit down without driving the car, "I haven't even driven one, yet I am putting in a reservation. It's all somewhat irrational, but I had to have it."

At 8.8' long, the car can fit into some of the city's tightest parking spaces, but one popular way of parking the Smart car is actually illegal in New York. Because the car is only 5.1' wide, it is sometimes parked perpendicular to the curb. Parking like that, except in designated areas, is illegal in New York City.

Officially called the smart fortwo, the Smart car has a top-speed of 90 mph and 40/45 miles per gallon for the city/highway (the mpg figures drop to 33/40 with new the EPA's 2008 consumption figures) and is available in both coupe and convertible models. From the look of the smart USA dealership map, there will be a location in NYC come January.