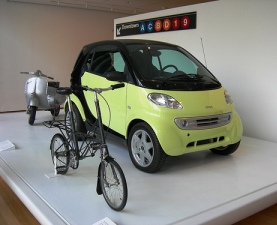 The Smart car has arrived in the States, and measuring at 8 feet and 8 inches long and 5 feet wide, the miniscule vehicle got some big attention in the Big Apple this week.

The car is around 3 feet shorter than the Mini Cooper, and could probably fit inside most of the gas guzzling SUVs in town. The 1800-pounder will hit the market stateside in early 2008, but will anyone want it? Business Week reports "Its base price is $12,000, and it's hard to beat the fuel efficiency of about 40 miles per gallon."

In New York, this car will get all the good parking spots -- as there's little it couldn't fit into. The Museum of Modern Art even displayed it (pictured) and called it "an innovative, stylish solution to two practical problems: urban crowding and diminishing energy." But is it safe to drive? Many have expressed concern over how it would handle, especially in the city streets, on the bridges, the FDR and West Side Highway. One bump from a cab while traveling at a high speed may send this thing flying, but the company is expecting 4 of 5 stars from the U.S. crash-test results that are coming out later this year.

The European New Car Assessment Program crash-tested a previous model, the Smart City Coupe, and gave it a three-star rating out of a possible five. The U.S. model is almost 8 inches longer than the European one, with safey improvements including a steel safety "cage" inside, more air bags, and "intelligent" seatbelts that sense motion changes.

Some fun facts: More than 20,000 people have signed up to be Smart car owners in the U.S. The car has a 70-horsepower, 1-liter, three-cylinder engine. And it was all created by Nicolas Hayek, inventor of the Swatch watch. He "went to Mercedes-Benz with his idea for an 'ultra-urban' car with interchangeable body panels for style and color -- a feature similar to the trendy Swiss watch. The prototype of the Smart City Coupe was introduced in Germany in 1997." Make your own, here!